Main physical and chemical properties: white or almost white tablets with a bevel and a scoreline.

The inhibitory activity of aciclovir against the above viruses is highly selective. The enzyme thymidine kinase in a normal uninfected cell does not use aciclovir as a substrate, hence the toxic effect on host cells is minimal. However, thymidine kinase, encoded in herpes simplex, chickenpox, herpes zoster and Epstein-Barr virus, converts aciclovir to aciclovir monophosphate – a nucleoside analogue, that is then converted sequentially to diphosphate and triphosphate using cell enzymes. Following the incorporation of aciclovir into viral DNA, triphosphate interacts with viral DNA polymerase, resulting in the cessation of viral DNA chain synthesis.

Prolonged or repeated courses of treatment in severely immunocompromised patients may reduce the susceptibility of certain strains of the virus, that do not always respond to aciclovir treatment. Most clinical cases of non-susceptibility are associated with viral thymidine kinase deficiency, although viral thymidine kinase and DNA damage have been reported. In vitro interaction of individual herpes simplex viruses with aciclovir may also lead to the formation of less sensitive strains. The relationship between the susceptibility of individual herpes simplex viruses in vitro and the clinical outcomes of aciclovir treatment is not fully understood.

Aciclovir is only partially absorbed in the gastrointestinal tract (approximately 20% of the dose). Simultaneous intake of food does not reduce absorption. The maximum concentration is reached in 1.5 – 2 hours.

The level of its binding to plasma proteins is relatively low (from 9% to 33%) and does not change when interacting with other medicinal products.

Most of the medicinal product (85 – 90%) is excreted unchanged by kidneys and only a small part (10 – 15%) as a metabolite (9-carboxymethoxymethylguanine). Renal clearance of aciclovir is significantly higher than creatinine clearance, indicating that renal excretion is performed not only by glomerular filtration, but also by tubular secretion.

The terminal half-life of aciclovir following the intravenous administration is approximately 2.9 hours, in patients with chronic renal failure is 19.5 hours, during hemodialysis is 5.7 hours. Aciclovir levels in blood plasma are reduced approximately by 60% during dialysis.

Hypersensitivity to aciclovir, valaciclovir or any ingredient of the medicinal product.

Aciclovir is excreted mainly unchanged by the kidneys by tubular secretion, so any medicinal products, that have a similar mechanism of excretion may increase the concentration of aciclovir in blood plasma.

In case of simultaneous use of medicinal product with other medicines, the following is possible:

with probenecid, cimetidine – prolongation of the half-life of aciclovir and the area under the curve;

with immunosuppressants in patients after organ transplantation – increased level of aciclovir and inactive metabolite of immunosuppressive medicinal product (mycophenolate mofetil) in blood plasma; no dose adjustment is required due to the broad therapeutic index of aciclovir.

An experimental study of 5 men indicates that concomitant aciclovir therapy increases the AUC of fully administered theophylline by approximately 50%. It is recommended to measure the concentration in blood plasma during concomitant therapy with aciclovir.

No clinically relevant interactions of aciclovir with other medications were detected.

When using high doses of the medicinal product, an adequate level of hydration should be maintained.

ACICLOVIR-DARNITSA should be used with caution in patients with impaired renal function, as aciclovir is excreted mainly by renal clearance. Dose adjustment should be performed (see section «Posology and method of administration»).

ACICLOVIR-DARNITSA should be used with caution in elderly patients, as this group of patients is more likely to have impaired renal function. If necessary, dose adjustment should be performed (see section «Posology and method of administration»).

Both of these groups (patients with impaired renal function and elderly patients) are at risk for neurological disorders, and therefore should be closely monitored for these adverse reactions. According to the data obtained, such reactions are generally reversible in case of discontinuation of treatment with the medicinal product (see section "Undesirable effects").

The risk of kidney damage increases when used in combination with other nephrotoxic medications.

Prolonged or repeated courses of aciclovir treatment in immunocompromised individuals may result in the release of susceptible viral strains, that may not respond to long-term treatment with aciclovir.

The available clinical trial data are not sufficient to conclude that aciclovir treatment reduces the incidence of chickenpox-related complications in immunocompetent patients.

The results of the use of various pharmaceutical forms of aciclovir by pregnant women are documented in the post-authorization register of pregnancy supervision. There was no increase in the number of birth defects in children, whose mothers used aciclovir during pregnancy compared with the general population.

When aciclovir administered orally at a dose of 200 mg 5 times a day, it passes into breast milk in concentrations of 0.6-4.1% of the corresponding level of aciclovir in blood plasma. Potentially, a child can absorb aciclovir at a dose of up to 0.3 mg/kg body weight per day.

During pregnancy or breastfeeding, the medicinal product should be used when its potential benefit to the mother outweighs the possible risk to the fetus.

There is no information on the effect of aciclovir on female fertility.

In a study of 20 male patients with normal sperm counts when administered orally at a dose of up to 1 g per day for 6 months, no clinically significant effect on sperm count, motility or morphology was observed.

Clinical studies of the effect of aciclovir on the speed of reaction when driving a car or working with other mechanisms have not been conducted. The pharmacology of aciclovir does not provide basis to expect any adverse effects. The clinical status of the patient and the adverse reaction profile of the medicinal product should be taken into account when deciding on the possibility of driving a car and other mechanisms.

The tablet should be taken whole with water. When using high doses of the medicinal product, an adequate level of hydration should be maintained.

ACICLOVIR-DARNITSA should be used at a dose of 200 mg 5 times per day with an interval of approximately 4 hours, except at night. The duration of treatment is 5 days, but in case of severe primary infection it can be extended.

If necessary, in patients with severe immunodeficiency (e.g. after bone marrow transplantation) or with reduced intestinal absorption, a single dose may be doubled to 400 mg or used the appropriate dose for intravenous administration.

Treatment should be started as early as possible after the onset of infection. In case of recurrent herpes, it is the best to start treatment in the prodromal period or after the first signs of skin lesions.

Prevention of relapse of infections caused by Herpes simplex virus in patients with normal immunity.

In some cases, a radical improvement is observed after administering a daily dose of 800 mg.

To monitor possible changes in the natural course of the disease, medication therapy should be interrupted periodically at intervals of 6 – 12 months.

ACICLOVIR-DARNITSA should be used at a dose of 200 mg 4 times a day with a 6-hour interval.

If necessary, in patients with severe immunodeficiency or with reduced intestinal absorption, a single dose may be doubled to 400 mg or the appropriate dose for intravenous administration should be used.

The duration of prevention depends on the length of the risk period.

ACICLOVIR-DARNITSA should be used at a dose of 800 mg 5 times per day with an interval of approximately 4 hours, except at night. Duration of treatment – 7 days.

Treatment should be started as early as possible after the onset of the disease; the result will be better if therapy is started immediately after the appearance of the rash.

In patients with severe immunodeficiency (e.g, after bone marrow transplantation) or with reduced intestinal absorption, it is preferable to use intravenous administration of medicinal product.

Children under the age of 2 years.

Posology and prevention of infections caused by Herpes simplex virus in immunodeficient children.

ACICLOVIR-DARNITSA should be used in same doses as for adults.

More precisely, the dose of the medicinal product can be calculated per the child's body weight, which is 20 mg/kg of body weight per day, divided into 4 doses. The maximum daily dose is 800 mg. Duration of treatment is 5 days.

ACICLOVIR-DARNITSA should be used with caution. It is necessary to maintain an adequate level of hydration of body.

In the prevention and treatment of Herpes simplex infections in patients with renal insufficiency, the recommended oral doses do not result in the accumulation of aciclovir, which would exceed the safe level established for intravenous administration. However, in patients with severe renal insufficiency (creatinine clearance less than 10 mL/min) it is recommended to use ACICLOVIR-DARNITSA at a dose of 200 mg 2 times per day with an interval of approximately 12 hours.

Use in elderly patients.

ACICLOVIR-DARNITSA should be used with caution. It is necessary to maintain an adequate level of hydration of the body.

The possibility of renal impairment in elderly patients should be considered, and the dose of medicinal product for them should be changed accordingly.

ACICLOVIR-DARNITSA is used for children starting from 2 years.

Symptoms. Aciclovir is only partially absorbed from the digestive tract. Accidental administration of up to 20 g of aciclovir without toxic effects has been reported.

Treatment: symptoms of intoxication, symptomatic therapy, in severe cases, hemodialysis should be examined for.

Renal pain may be associated with renal failure and crystalluria.

The above mentioned symptoms are in most cases reversible and occur mainly in patients with renal insufficiency or other predisposing factors (see section "Special warnings and precautions for use").

Because hair loss can be associated with a large number of diseases and medications, no clear association has been found with aciclovir.

Store in the original package at a temperature below 25°C. 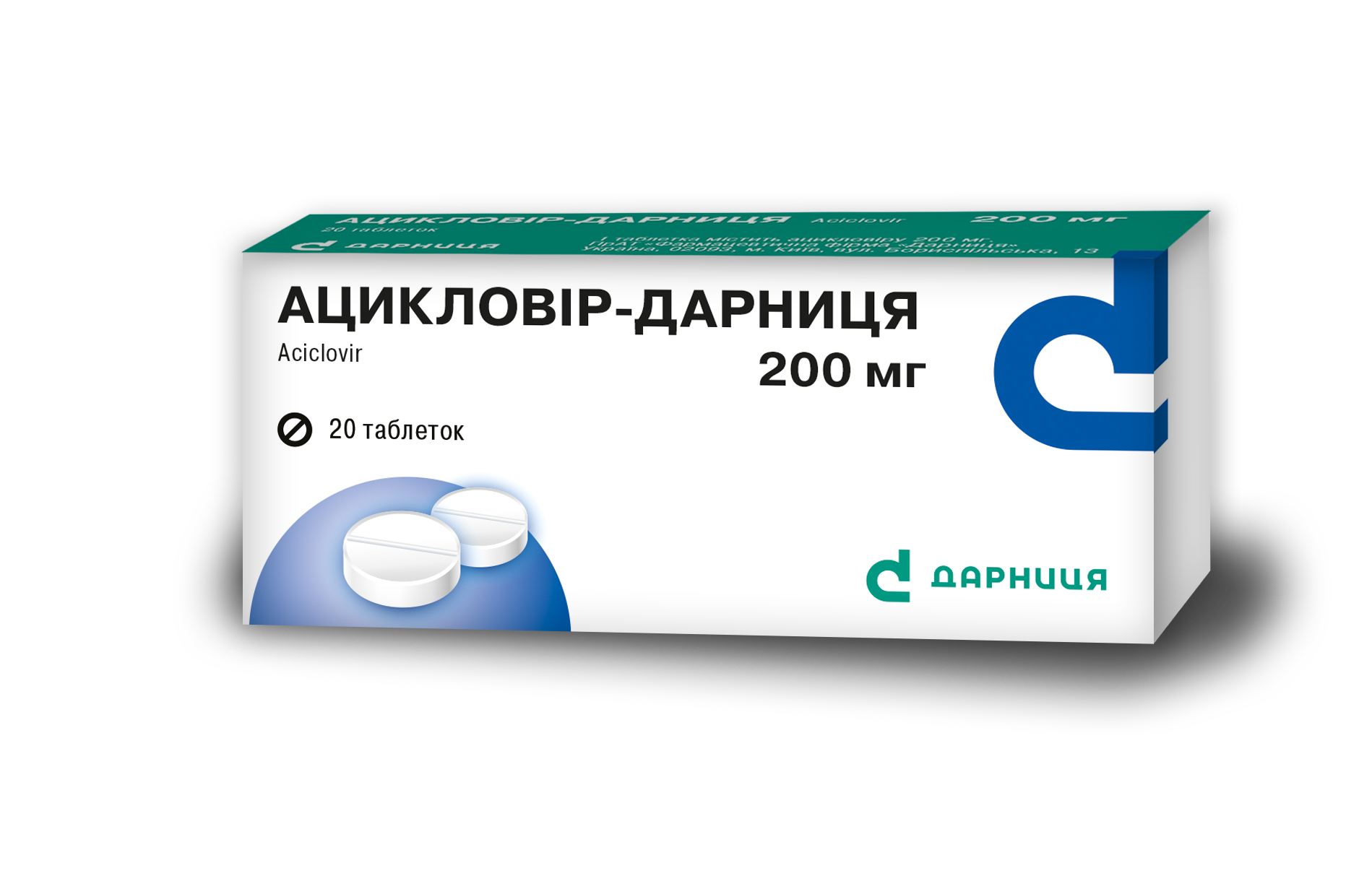 The tablets should be taken whole with water. When high doses of the drug are used, adequate hydration of the patient should be maintained.

Aciclovir-Darnitsa is used as 200 mg 5 times per day with approximately 4-hour intervals, apart from nighttime. The treatment duration is 5 days; however, in case of severe primary infection, it can be extended.

If necessary, in patients with severe immunodeficiency (e.g., after bone marrow transplant) or with decreased intestinal absorption, the single dose can be doubled to 400 mg or an appropriate intravenous dose used.

Treatment should be started as soon as possible after infection develops. In case of recurrent herpes, it is better to start treatment during the prodromal period or after the first signs of skin lesions.