Azithromycin is a member of the group of macrolide antibiotics – azalides, which possess a wide spectrum of antimicrobial action. Azithromycin's mechanism of action involves inhibition of bacterial protein synthesis by binding to the 50S subunit of ribosomes and prevention of translocation of peptides in the absence of an effect on polynucleotide synthesis. Resistance to azithromycin may be inherent or acquired. Complete cross resistance exists among Streptococcus pneumoniae, betahaemolytic streptococcus of group A, Enterococcus faecalis, and Staphylococcus aureus, including methicillin-resistant Staphylococcus aureus (MRSA), to erythromycin, azithromycin, other macrolides and lincosamides.

Spectrum of antimicrobial action of azithromycin:

*Methicillin-resistant Staphylococcus aureus has a very high prevalence of acquired macrolide resistance and is listed here due to its rare sensitivity to azithromycin.

Binding to serum proteins varies depending on the plasma concentration and ranges from 12% at 0.5 μg/ml to 52% at 0.05 μg/ml in serum. The apparent volume of distribution at steady state (VVSS) was 31.1 L/kg.

Approximately 12% of the intravenous dose of azithromycin is excreted unchanged in the urine over the next three days. Particularly high concentrations of unchanged azithromycin were found in human bile. Ten metabolites were also found in bile, which were formed by N- and O-demethylation, hydroxylation of deosamine and aglycone rings, and cleavage of the cladinose conjugate. Comparison of the results of liquid chromatography and microbiological analysis showed that azithromycin metabolites are microbiologically inactive.

Azithromycin should be used with caution together with other medications that may prolong the QT interval (see the section "Special warnings and precautions for use").

Antacids. During the study of the effects of simultaneous administration of antacids on the pharmacokinetics of azithromycin, no effect on overall bioavailability was seen, although peak plasma levels were reduced by approximately 25%. Azithromycin and antacids should not be taken simultaneously.

Cetirizine. In healthy volunteers, coadministration of a 5-day regimen of azithromycin with cetirizine 20 mg at steady-state resulted in no pharmacokinetic interaction and no significant changes in the QT interval.

Didanosine. Coadministration of 1200 mg/day azithromycin with 400 mg/day didanosine in 6 HIV- positive subjects did not appear to affect the steady-state pharmacokinetics of didanosine as compared with placebo.

Zidovudine. Concomitant administration of azithromycin (single doses of 1000 mg and multiple doses of 1200 mg or 600 mg) had little effect on the plasma pharmacokinetics or urinary excretion of zidovudine or its glucuronide metabolite. However, the administration of azithromycin increased the concentrations of phosphorylated zidovudine, the clinically active metabolite, in peripheral blood mononuclear cells. The clinical significance of this fact is unknown, but it may be of benefit to patients.

Pharmacokinetic studies have been conducted between azithromycin and the following drugs known to undergo significant cytochrome P450 mediated metabolism.

Carbamazepine. In a pharmacokinetic interaction study in healthy volunteers, no significant effect was observed on the plasma levels of carbamazepine or its active metabolite in patients receiving concomitant azithromycin.

Cyclosporin. In a pharmacokinetic study involving healthy volunteers who took azithromycin 500 mg/day orally for 3 days, and then took a single dose of 10 mg/kg cyclosporine, a significant increase in the Cmax and AUC0-5 values of cyclosporine was found. Consequently, caution should be exercised before considering concurrent administration of these drugs. If coadministration of these drugs is necessary, cyclosporin levels should be monitored and the dose adjusted accordingly.

Efavirenz. Concomitant administration of a single dose of azithromycin 600 mg and efavirenz 400 mg daily for 7 days did not cause any clinically significant pharmacokinetic interactions.

Indinavir. Coadministration of a single dose of 1200 mg azithromycin had no statistically significant effect on the pharmacokinetics of indinavir administered as 800 mg three times daily for 5 days.

Midazolam. Coadministration of azithromycin 500 mg/day for 3 days did not cause clinically significant changes in the pharmacokinetics and pharmacodynamics of a single 15 mg dose of midazolam.

Sildenafil. In healthy male volunteers, there was no evidence of the effect of azithromycin (500 mg daily for 3 days) on the AUC and Cmax values of sildenafil or its main circulating metabolite.

Terfenadine. No interaction between azithromycin and terfenadine has been reported during pharmacokinetic studies. Isolated cases have been reported where the possibility of such an interaction could not be completely excluded, but there was no concrete evidence that such interaction existed.

Theophylline. There was no evidence of clinically significant pharmacokinetic interaction with concomitant use of azithromycin and theophylline in healthy volunteers.

Triazolam. Concomitant administration of azithromycin 500 mg on Day 1 and 250 mg on Day 2 with 0.125 mg of triazolam did not significantly affect the pharmacokinetic parameters of triazolam compared to triazolam and placebo.

Allergic reactions. In rare cases, azithromycin has been reported to cause serious allergic reactions, such as angioedema and anaphylaxis (in rare cases – fatal), dermatological reactions, including acute generalized exanthematous pustulosis. Some of these reactions led to the development of recurrent symptoms and required longer follow-up and treatment.

Impaired liver function. Since liver is the main route of azithromycin metabolism, azithromycin should be used with extreme caution in patients with hepatic failure.

Liver function should be monitored if symptoms of liver dysfunction develop, such as asthenia, which develops rapidly and is accompanied by jaundice, dark urine, a tendency to bleed, and hepatic encephalopathy.

If liver dysfunction is detected, azithromycin should be discontinued.

Cardiac arrhythmias. Prolonged cardiac repolarisation and QT interval, which increases the risk of cardiac arrhythmia and ventricular flutter-fibrillation, was observed during the treatment with other macrolide antibiotics, including azithromycin. Therefore as the following situations may lead to an increased risk for ventricular arrhythmias (including torsade de pointes) which can lead to cardiac arrest, azithromycin should be used with caution in patients ongoing proarrhythmic conditions (especially women and elderly patients) such as patients:

Streptococcal infections. Azithromycin is generally effective in the treatment of oropharyngeal inflammatory diseases caused by Streptococcus, but there are no data demonstrating the effectiveness of azithromycin in the prevention of acute rheumatic polyarthritis.

Superinfections. As with other antibacterial drugs, there is a possibility of superinfection (mycosis).

C. difficile produces toxins A and B, which contribute to the development of diarrhea, related with C. difficile. Hypertoxin-producing C. difficile strains increase the incidence rate, as these infections may be resistant to antibacterial therapy and may cause colectomy. Possibility of development of C. difficile-related diarrhea should be taken into account in all patients with diarrhea that occurs after the use of antibiotics. It is necessary to carefully analyze the medical history, as it has been reported that C. difficile-related diarrhea may develop 2 months after administration of antibacterial medications.

During the use of the drug, alcoholic beverages should be avoided.

Fertility studies were conducted in rats; reduced pregnancy rates were noted following administration of azithromycin. The relevance of these data to humans is unknown.

Considering the possibility of developing such adverse reactions as dizziness, drowsiness, visual disturbances, it is not recommended to use the drug when driving vehicles or using other mechanisms.

AZICIN - DARNITSA should be administered in adults and children with body weight more than 45 kg.

Azithromycin should be taken orally once daily at least 1 hour before or 2 hours after meals.

For ENT-infections, infections of respiratory tract, skin and soft tissues (except for chronic erythema migrans): 500 mg (1 tablet) once a day for 3 days.

In case of hepatic failure, the drug should not be used in patients with severe liver diseases, since azithromycin is metabolized in the liver and excreted in the bile. Studies related to the treatment of such patients with azithromycin have not been conducted.

Since elderly patients may be at risk for cardiac electrical conduction disorders, caution is recommended when using azithromycin due to the risk of development of cardiac arrhythmia and torsade de pointes arrhythmia.

AZICIN - DARNITSA in this dosage form should be used in children with a body weight of more than 45 kg.

Children and patients with body weight less than 45 kg should use azithromycin in a different dosage form.

The following table shows undesirable effects determined using clinical studies and during post-marketing follow-up, when using all dosage forms of azithromycin in accordance with the system-organ class and frequency. Adverse reactions reported during post-marketing follow-up are shown in italics. Groups by frequency of manifestations were determined using the following scale: very common (≥1/10); common (≥1/100 to <1/10); uncommon (≥1/1000 to <1/100); rare (≥1/10000 to <1/1000), very rare (<1/10000); unknown (cannot be determined from available data). Within each group, according to the frequency of manifestations, adverse events are indicated in order of decreasing severity.

Information on adverse reactions that may be associated with the prevention and treatment of Mycobacterium Avium Complex is based on data from clinical studies and observations in the post-marketing period. These adverse reactions differ in type or frequency from those reported with the use of fast-acting dosage forms and long-acting dosage forms:

Keep in the original container at ≤25°C out of reach of children.

3 tablets in a blister; 1 blister in a carton box.

Location of the manufacturer and address of manufacturing facilities. 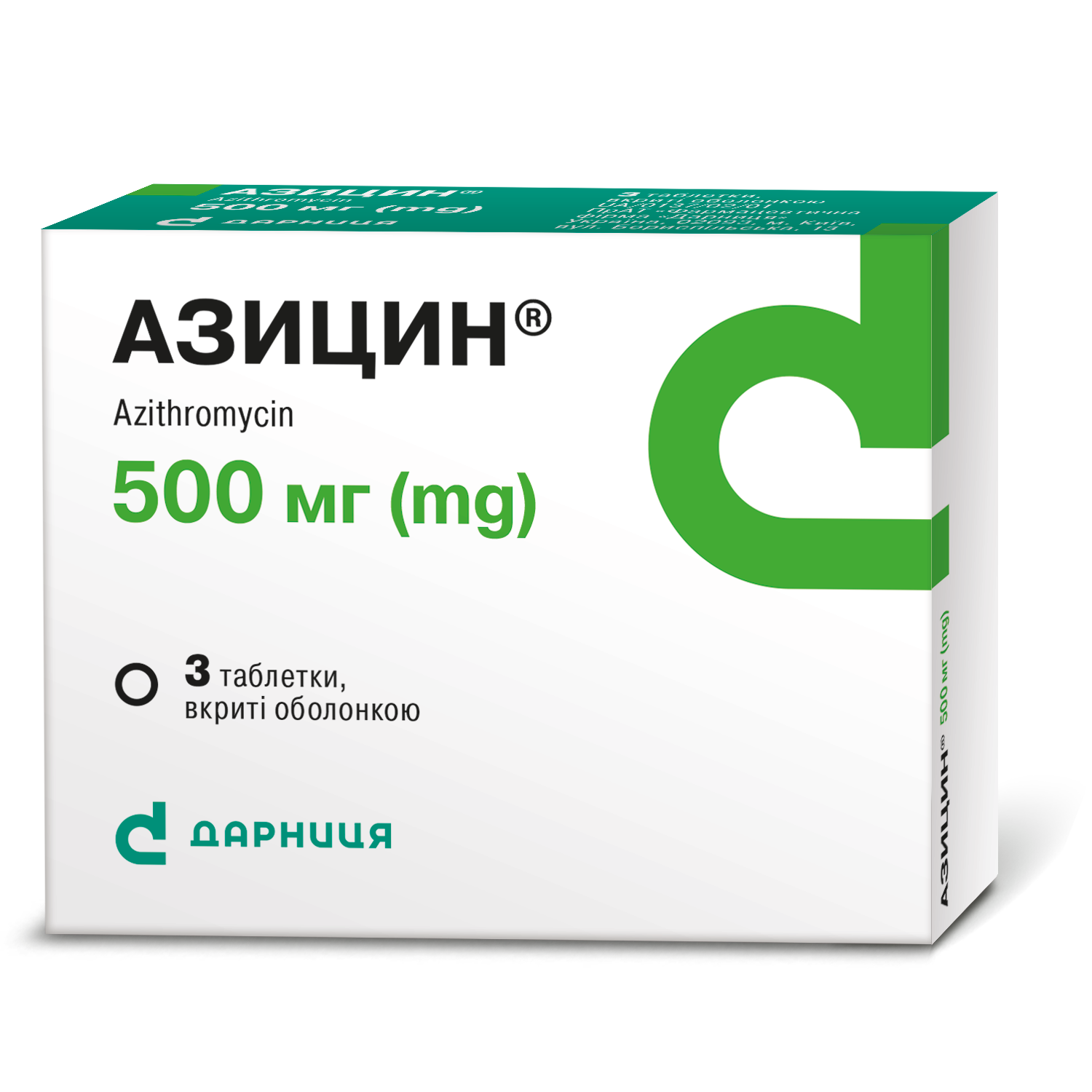 Azithromycin belongs to the macrolides—azalides with a broad spectrum of antimicrobial action. The mechanism of action of azithromycin is related to interfering with bacterial protein synthesis via binding to the 50S-subunit of their ribosomes and preventing protein translation without any effect on the synthesis of polynucleotides.

Infections caused by microorganisms that are susceptible to azithromycin:

Azicin should only be used in adults and children with a body weight of over 45 kg.

Azithromycin should be taken orally once daily not less than 1 hour before or 2 hours after a meal.

In ENT, respiratory, skin and soft tissue infections (not including chronic migratory erythema): 500 mg (1 tablet) once daily for 3 days.

In case of liver failure, the drug should not be used in patients with severe liver disease, as azithromycin is metabolized in the liver and excreted in the bile. No studies have been conducted on azithromycin administration in such patients.