Basic physical and chemical properties: hard capsules with a lid and a yellow body, containing a yellow powder with a greenish tinge with white specks.

Doxycycline is a semi-synthetic antibiotic of the tetracyclines group of broad spectrum of action. It causes a bacteriostatic effect by suppressing the protein synthesis of pathogens as a result of blocking the connection of aminoacyl-transport RNA (tRNA) with the "informational RNA (mRNA) - ribosome" complex.

The medicinal product is readily absorbed from the digestive tract, almost regardless of the presence of food. The plasma protein binding is 80–90 %. The maximum concentration in blood plasma is achieved 2 hours after medicinal product administration. Depending on the dose, the therapeutic concentration of doxycycline in the blood is maintained for 18–24 hours. It is rapidly distributed in most body fluids, including bile, paranasal sinuses, pleural, synovial, and ascitic fluids. The concentration in the cerebrospinal fluid varies and after parenteral administration can be 10–25 % of the concentration in the blood serum. Eliminated slowly. Elimination half-life of the medicinal product is 12–22 hours. A significant part of doxycycline is excreted unchanged in the faeces and about 40 % in the urine.

Doxycycline has been found clinically effective in the treatment of a variety of infections caused by susceptible strains of Gram-positive and Gram-negative bacteria and certain other micro-organisms:

The treatment of infections caused by microorganisms which respond to other tetracyclines, such as:

Prophylaxis in the following conditions: Scrub typhus, travelers’ diarrhoea (enterotoxigenic Escherichia coli), leptospirosis and malaria. Prevention of malaria should be used in accordance to current guidelines, as resistance is an ever changing problem.

Hypersensitivity to tetracyclines or to other components of the medicinal product; porphyria; severe liver failure; leukopenia.

with barbiturates, carbamazepine, primidone, rifampicin, phenytoin – a decrease in plasma concentrations and a reduction in the half-life (T1/2) of doxycycline (induction of monooxygenases and acceleration of biotransformation), which can lead to a decrease in the antibacterial effect;

with cyclosporine – may increase the plasma concentration of cyclosporine in blood plasma; co-administration should only be undertaken with appropriate monitoring;

with retinoids – increased risk of intracranial hypertension; this combination should not be used;

with methotrexate – increasing the toxicity of the latter; this combination should be used with caution;

with penicillins – reducing the effectiveness of the latter;

with oral vaccines against typhoid fever – reducing the effectiveness of the latter; this combination should not be used.

Concomitant use of isotretinoin or other systemic retinoids and doxycycline should be avoided. Each of these agents used alone has been associated with benign intracranial hypertension (pseudotumour cerebri).

To reduce stomach irritation, the medicinal product should be taken with food, drinking plenty of water.

With long-term use of the medicinal product, the composition of peripheral blood should be regularly monitored, functional liver tests should be performed, and the content of urea in the blood serum should be determined.

In the treatment of infections caused by β-hemolytic group A streptococci, the duration of treatment should be at least 10 days.

When treating sexually transmitted diseases with suspected concomitant syphilis, appropriate diagnostic procedures, including dark field microscopy and other tests, should be employed. In such cases, monthly serological tests should be performed for at least 4 months.

Use the medicinal product with caution in patients with impaired liver function or people who are receiving potentially hepatotoxic drugs. Hepatic impairment associated with oral or parenteral of tetracyclines, including doxycycline, has been reported extremely rarely.

Use the medicinal product with caution in patients with myasthenia gravis because drugs of the tetracyclines group, including doxycycline, can cause mild neuromuscular blockade.

Renal excretion of doxycycline in patients with normal renal function is approximately 40 % in 72 hours. This range can be reduced to 1–5 % within 72 hours in people with severe renal insufficiency (creatinine clearance below 10 ml/min). Studies have not shown a significant difference in the half-life of doxycycline from serum in patients with normal and impaired renal function. Hemodialysis does not affect the serum half-life of the.

The antianabolic action of tetracyclines can lead to an increase in blood urea levels. The antianabolic effect was not observed with the use of doxycycline in patients with impaired renal function.

Treatment with antibacterial medicinal products can lead to overgrowth of insensitive microorganisms, including microorganisms of the genus Candida. To prevent the development of candidiasis, it is recommended to use antifungal drugs simultaneously with doxycycline.

Pseudomembranous colitis has been reported in some patients taking antibacterial medicinal products, including doxycycline. The severity of this complication ranged from mild to life-threatening. It is necessary to consider this diagnosis in patients presenting with diarrhea as a result of the use of antibacterial drugs.

Esophagitis and esophageal ulcers have been reported in some patients taking encapsulated or tablet forms tetracycline class, including doxycycline. Most of these patients administered the medicinal product just before bedtime or with insufficient fluid.

When examining a biopsy of the thyroid gland in patients who have been taking doxycycline for a long time, it is possible to stain the tissue in the micropreparations in a dark brown color.

The use of tetracyclines can lead to an exacerbation of the course of systemic lupus erythematosus.

Serious skin reactions such as exfoliative dermatitis, erythema multiforme, Stevens-Johnson syndrome, toxic epidermal necrolysis, and drug rash with eosinophilia and systemic manifestations (DRESS) have been reported in patients receiving doxycycline. If serious skin reactions occur, doxycycline should be discontinued immediately and appropriate therapy should be prescribed.

The occurrence of photoonicholysis has been reported in patients taking doxycycline.

False elevations of urinary catecholamine levels may occur due to interference with the fluorescence test.

Do not drink alcohol during treatment.

The medicinal product is contraindicated during pregnancy because the use of tetracyclines during dental development (during pregnancy) can cause a permanent discoloration of the teeth (yellow-brown-gray). This adverse reaction is more common with long-term use, but can also occur during repeated short courses of treatment. Enamel hypoplasia has also been reported.

The medicinal product is contraindicated during breastfeeding because tetracyclines pass into breast milk.

Until the individual patient's response to the drug has been clarified, one should refrain from driving vehicles or working with mechanisms, since during treatment with doxycycline, visual impairment, dizziness, arterial hypertension, ringing in the ears, blurred vision, scotoma, diplopia, long-term vision loss may occur.

The medicinal product is administered orally during or after a meal (can be washed down with milk or kefir).

Adults and children over 12 years old weighing more than 45 kg.

The duration of the course of treatment is determined by the doctor individually, continuing treatment for at least 24–48 hours after the disappearance of symptoms and normalization of body temperature.

Acne: the medicinal product should be used in a dose of 50 mg per day for 6–12 weeks.

Chloroquine-resistant falciparum malaria: the medicinal product should be used in a dose of 200 mg per day for at least 7 days.

Prophylaxis of malaria: the medicinal product is prescribed in a dose of: adults – 100 mg per day, children over 12 years – from 2.2 mg/kg body weight per day to a total dose of 100 mg per day. Prophylaxis can begin 1–2 days before traveling to a region with malaria. Prophylactic use of the medicinal product should be continued daily during travel in the malarial areas and for 4 weeks after the traveler leaves the malarial area. Current malaria treatment standards should also be considered.

The prevention of scrub typhus: The medicinal product should be used in a dose of 200 mg once.

The medicinal product is contraindicated for use in children under the age of 12 years.

Like other tetracyclines, doxycycline forms stable calcium complexes in any bone-forming tissue. A decrease in the level of growth of the fibula was observed in premature infants who received oral tetracycline at a dose of 25 mg/kg of body weight every 6 hours. This adverse reaction is reversible when the medicinal product is discontinued.

The use of tetracyclines during the development of teeth (children under 12 years) can cause a permanent discoloration of the teeth (yellow-brown-gray). This adverse reaction is more common with long-term use, but can also occur during repeated short courses of treatment. Enamel hypoplasia has also been reported.

Hepatobiliary disorders: there have been reports of isolated cases of hepatotoxicity with a temporary increase in liver function, liver dysfunction, jaundice, hepatitis, liver failure, pancreatitis.

Endocrine disorders: with long-term use of tetracyclines, a brown-black color of the micropreparation of the thyroid tissue was observed. No thyroid dysfunction was detected.

Nervous system disorders: headache, dizziness, protrusion of the umbilicus in newborns, benign intracranial hypertension (pseudotumour cerebri), symptoms of which included blurred vision, scotoma, and diplopia, have been reported to cause irreversible vision loss.

Other: staining and hypoplasia of tooth enamel with prolonged use of the medicinal product.

Store in the original packaging at temperature not above 25 °C.

Keep out of reach of children. 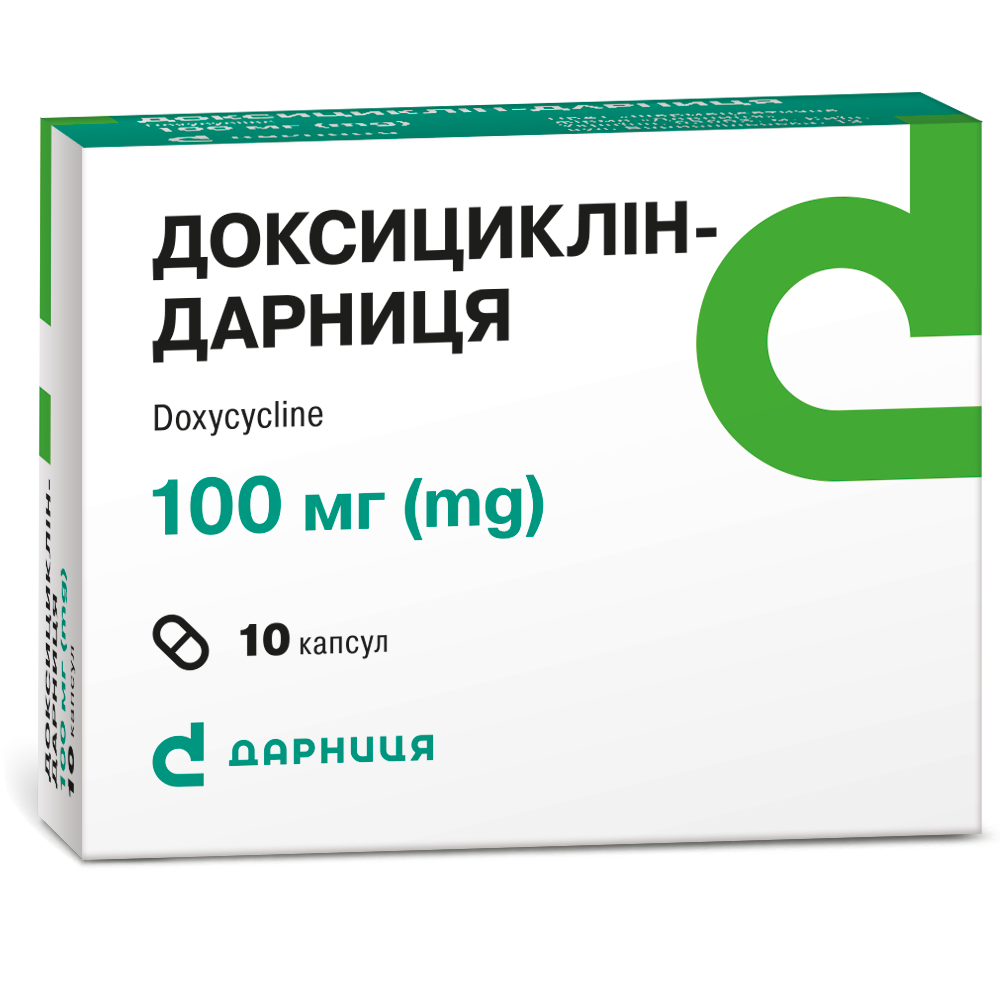 Doxycyclinе is a semisynthetic antibiotic that belongs to broad-spectrum tetracyclines. It has bacteriostatic activity due to inhibition of protein synthesis in the pathogen by blocking bonds between the aminoacyl-tRNA and «messenger RNA (mRNA) – ribosome» complex.

Treatment of infections caused by susceptible strains of gram-positive and gram-negative bacteria as well as some other microorganisms.

Treatment of infections caused by microorganisms susceptible to tetracyclines.

The drug is used orally during or after a meal (can be taken with milk or drinking yogurt).

Adults and children with a body weight of over 45 kg.

The duration of treatment is determined by a physician on an individual basis; the treatment is continued for at least 24–48 hours after the disappearance of symptoms and normalization of body temperature.

Children younger than 12 with a body weight of below 45 kg.