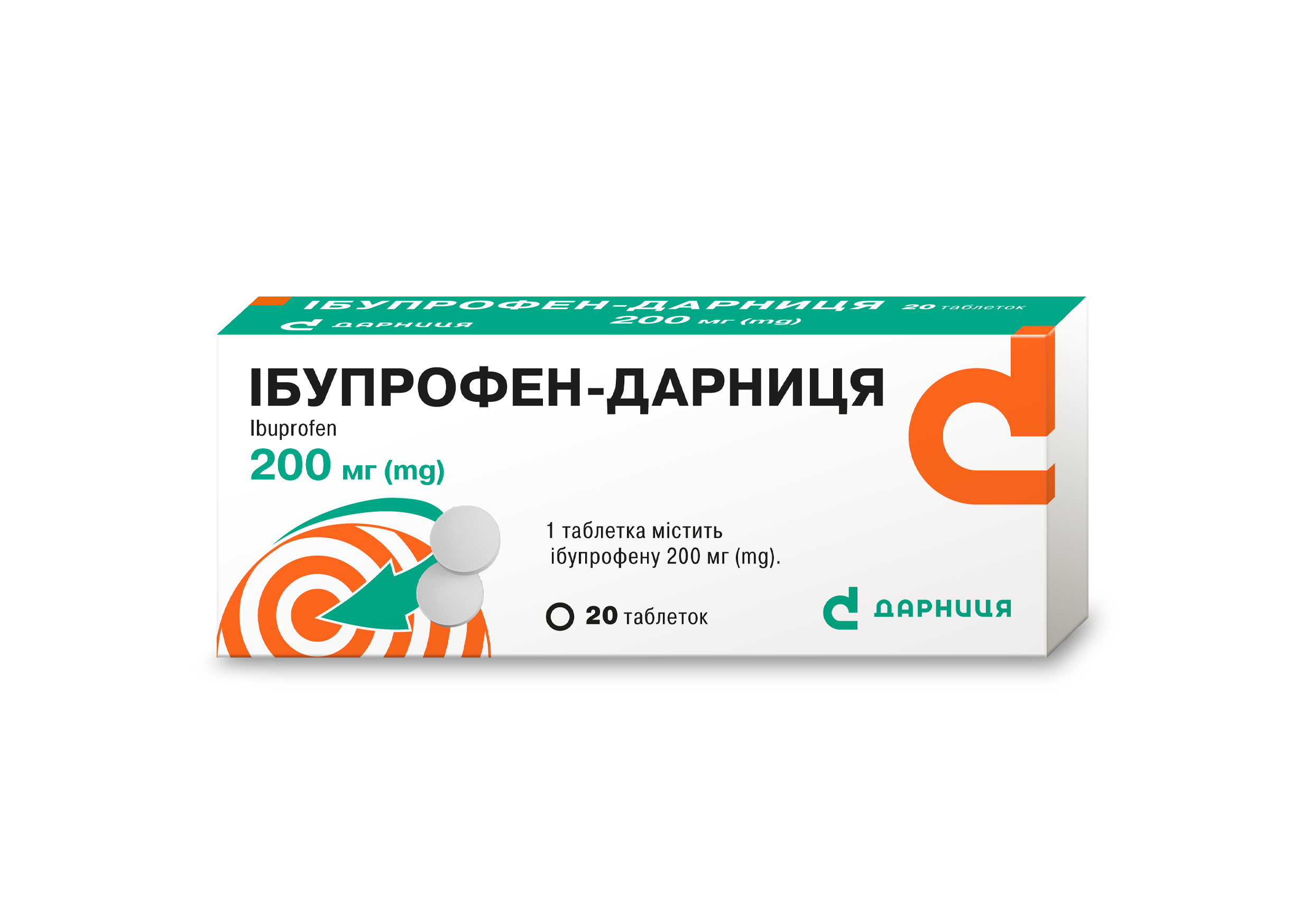 Ibuprofen is a nonsteroidal anti-inflammatory drug (NSAID), a propionic acid derivative that exerts its effect by inhibiting the synthesis of prostaglandins – mediators of pain and inflammation. Ibuprofen has analgesic, antipyretic and anti-inflammatory effects.

Symptomatic treatment of headache, toothache, dysmenorrhea, neuralgia, back pain, joint, muscle, and rheumatic pain, as well as for cold and flu symptoms.

For short-term oral use only. Tablets should taken with water without chewing.

The lowest effective dose required to treat symptoms should be used for the shortest period of time. If symptoms persist for more than 5 days from the start of treatment or worsen, consult a physician.

Main physical and chemical properties: tablets white or almost white, round, with a biconvex surface.

Ibuprofen is a non-steroidal anti-inflammatory drug (NSAID), a derivative of propionic acid, which has been shown to be effective in inhibiting the synthesis of prostaglandins, mediators of pain and inflammation. Ibuprofen has analgesic, antipyretic and anti-inflammatory effects. In addition, ibuprofen reversibly inhibits platelet aggregation.

Ibuprofen is rapidly absorbed in the gastrointestinal tract and binds to blood plasma proteins.

The maximum blood plasma concentration is determined 45 minutes after administration on an empty stomach. If this medicine is used with food, peak levels are observed 1-2 hours after use. Ibuprofen is metabolized in the liver, excreted by the kidneys unchanged or in the form of metabolites. The half-life is –almost 2 hours. There are no significant differences in the pharmacokinetic profile in elderly patients.

Interaction with other medicinal products and other forms of interaction

In general, caution should be exercised when using NSAIDs in combination with other medicinal products that may increase the risk of gastrointestinal ulcers, gastrointestinal bleeding, or impaired renal function.

Ibuprofen, like other NSAIDs, should not be used in combination with:

Ibuprofen should be used with caution in combination with the following medicinal products:

antihypertensive medicinal products (ACE inhibitors and angiotensin II antagonists) and diuretics: NSAIDs can reduce the effect of these medicinal products. In some patients with impaired renal function (patients with dehydration or in elderly patients with impaired renal function), concomitant use of ACE inhibitors or angiotensin II antagonists and agents that inhibit cyclooxygenase can lead to further deterioration of kidney function, including possible acute renal failure that is usually reversible. These interactions should be considered in patients receiving coxib concomitantly with ACE inhibitors or angiotensin II antagonists. Therefore, such combination should be used with caution, especially in the elderly patients. If treatment is necessary, ensure that the patient is sufficiently hydrated and take into account the need to monitor renal function at the beginning of combination therapy, as well as with a certain frequency thereafter. Diuretics may increase the risk of nephrotoxic effects of NSAIDs;

corticosteroids: increased risk of ulcers and bleeding in the gastrointestinal tract;

lithium: there is evidence of a potential increase in plasma lithium levels;

methotrexate: there is a possibility of an increase in the level of methotrexate in the blood plasma;

mifepristone: NSAIDs should not be used earlier than 8-12 days after mifepristone administration, as they may reduce its effectiveness;

tacrolimus: the risk of nephrotoxicity may increase with the simultaneous use of NSAIDs with tacrolimus;

The undesirable effects associated with ibuprofen can be minimized by using the lowest effective dose needed to treat the symptoms for the shortest period of time.

In elderly patients, there is an increased incidence of undesirable effects to NSAIDs, especially gastrointestinal bleeding and perforation, which can be fatal.

Effects on the respiratory system.

In patients who suffer from bronchial asthma or allergic diseases or have these diseases in history, bronchospasm may occur.

Avoid the simultaneous use of ibuprofen with other NSAIDs, including selective inhibitors of cyclooxygenase-2, as this increases the risk of adverse reactions.

Ibuprofen should be used with caution in systemic lupus erythematosus and mixed connective tissue disease due to the increased risk of aseptic meningitis. Cases of aseptic meningitis have been reported with ibuprofen. Although this effect is more likely in patients with systemic lupus erythematosus and other connective tissue diseases, such cases have also been reported in some patients without chronic diseases, therefore, this should be taken into account when using this medicinal product.

Effects on the cardiovascular and cerebrovascular systems.

Patients with a history of hypertension and/or heart failure should start treatment with caution (consultation with a doctor is required), since cases of fluid retention, hypertension and edema have been reported with ibuprofen therapy, like other NSAIDs.

Clinical study data and epidemiological data indicate that the use of ibuprofen, especially in high doses (2400 mg per day), as well as long-term use, can lead to a slight increase in the risk of arterial thrombotic complications (for example, myocardial infarction or stroke). In general, epidemiological data do not suggest that a low dose of ibuprofen (e.g. ≤ 1200 mg per day) may increase the risk of myocardial infarction.

The clinical picture should also be carefully assessed before initiating long-term treatment of patients with risk factors for cardiovascular complications (such as hypertension, hyperlipidemia, diabetes, smoking), especially if high doses of ibuprofen (2400 mg per day) are required.

Caution should be exercised in patients with renal insufficiency due to the possibility of impaired renal function. Ibuprofen should be used with caution in patients with kidney or liver disease, especially during concomitant diuretic therapy, as inhibition of prostaglandins can lead to fluid retention and further deterioration of renal function. These patients should receive the lowest dose of ibuprofen and regularly monitor renal function. In case of dehydration, ensure adequate fluid intake. There is a risk of kidney failure in children (ages 6 and up) and dehydrated adolescents.

IIn general, the systematic use of analgesics, especially combinations of different pain relievers, can lead to long-term kidney damage with the risk of renal failure (analgesic nephropathy). The highest risk of this reaction exists in elderly patients, patients with renal failure, heart failure, and hepatic failure, as well as in those receiving diuretic or ACE inhibitor therapy. After discontinuation of NSAID therapy, the condition observed before treatment usually returns.

With long-term use of ibuprofen, it is necessary to regularly check the indicators of liver function, renal function, as well as hematological function / blood picture.

Effects on fertility in women.

There is limited evidence that drugs that inhibit cyclooxygenase / prostaglandin synthesis can interfere with ovulation. This effect is reversible upon discontinuation of treatment.

Effects on the gastrointestinal tract.

NSAIDs should be used with caution in patients with a history of gastrointestinal diseases (ulcerative colitis, Crohn's disease), since their condition may worsen.

The risk of gastrointestinal bleeding, perforation or ulceration increases with increasing doses of NSAIDs in patients with a history of peptic ulcer disease, especially complicated by bleeding or perforation, and in the elderly. These patients should start treatment with the lowest dose.

Combination therapy with protective medicinal products (such as misoprostol or proton pump inhibitors) is recommended for these patients, as well as for patients who require the concomitant use of low doses of acetylsalicylic acid or other medicinal products that may increase the risk from the gastrointestinal tract.

Long-term use of any pain relievers to treat headaches can worsen the condition. In such cases, you should consult a doctor and stop treatment. The consideration should be given to the possibility of headache due to medicinal product abuse in patients with frequent or daily headache despite (or due to) regular use of headache medications.

Caution should be exercised when treating patients concomitantly using medicinal products that may increase the risk of ulceration or bleeding, such as oral corticosteroids, anticoagulants (e.g. warfarin), selective serotonin reuptake inhibitors, or antiplatelet agents (e.g. aspirin).

In case of gastrointestinal bleeding or ulceration in patients receiving ibuprofen, treatment should be stopped immediately.

Very rarely, against the background of the use of NSAIDs, severe forms of skin reactions can occur, which can be fatal, including exfoliative dermatitis, Stevens-Johnson syndrome and toxic epidermal necrolysis. The risk of such reactions is highest at the beginning of therapy, in most cases such reactions began within the first month of treatment. At the first sign of a skin rash, pathological changes in the mucous membranes or any other signs of hypersensitivity, ibuprofen should be discontinued.

In exceptional cases, chickenpox can cause severe infectious complications from the skin and soft tissues. Currently, the influence of NSAIDs on the worsening of these infections cannot be ruled out, therefore it is recommended to avoid the use of the medicinal product in case of chickenpox.

This medicine contains 6.8 mg of sodium, i.e. it is practically free of sodium.

Suppression of prostaglandin synthesis can adversely affect pregnancy and / or embryo / fetal development. Epidemiological data indicate an increased risk of miscarriage, congenital heart defects and gastroschisis after the use of prostaglandin synthesis inhibitors in early pregnancy. The risk is thought to increase with dose and duration of therapy.

NSAIDs should not be used in the I and II trimester of pregnancy only if the potential benefit to the patient does not outweigh the potential risk to the fetus. If ibuprofen is used by a woman trying to become pregnant or during the first and second trimesters of pregnancy, the lowest possible dose should be used for the shortest period of time.

During the third trimester of pregnancy, all inhibitors of prostaglandin synthesis may pose the following risks:

In limited studies, ibuprofen has been found in breast milk at a very low concentration, so it is unlikely to adversely affect a breastfed infant.

Provided that it is used in accordance with the recommended doses and duration of treatment, the medicinal product does not affect the reaction rate when driving or operating other mechanisms.

For short-term oral use only. The tablets should be swallowed with water and not chewed.

The lowest effective dose required to treat symptoms should be used for the shortest period of time. If symptoms persist for more than 5 days after starting treatment or if they worsen, consult a doctor.

Do not use in children weighing less than 20 kg and under 6 years of age.

Symptoms of overdose occur within 4 hours after application.

The use of the medicinal product in children at a dose of more than 400 mg/kg may cause symptoms of intoxication. In adults, the effect of the dose is less pronounced. The half-life in overdose is 1.5-3 hours.

Treatment. There is no specific antidote. Treatment should be symptomatic and supportive, and include airway management and monitoring of cardiac function and vital signs until the patient is normalized. When using small amounts of the medicinal product (less than 50 mg / kg ibuprofen), it is recommended to drink water to minimize disturbances from the gastrointestinal cycle. Oral administration of activated charcoal or gastric lavage is recommended within 1 hour after the application of a potentially toxic dose of the medicinal product. The benefits of measures such as forced diuresis, hemodialysis and hemoperfusion have not been proven, since ibuprofen has a high degree of binding to plasma proteins. For frequent or prolonged muscle spasms, treatment should be given by intravenous diazepam or lorazepam. In the case of bronchial asthma, bronchodilators should be used. Seek medical attention.

The following adverse reactions refer to those that have been observed with short-term use of ibuprofen in non-prescription doses. When treating chronic conditions, additional undesirable effects may occur with long-term treatment.

Renal and urinary disorders: very rare: acute renal impairment, papillonecrosis, especially with prolonged use, associated with an increase in the level of urea in the blood serum, and edema; unknown: renal failure.

Clinical studies and epidemiological data indicate that the use of ibuprofen (especially in high doses of 2400 mg per day) and with long-term treatment may be associated with a slightly increased risk of arterial thrombotic complications (for example, myocardial infarction or stroke).

Store in the original package at a temperature not above 25°C.

Address of the manufacturer.

Date of the last revision.