The medicinal product combines two main effects: antiemetic effect and that of the accelerated gastric emptying and passing through the small intestine.

The antiemetic effect is caused by the impact on the central point of the brainstem (chemoreceptors - activating zone of the vomiting center), probably due to inhibition of dopaminergic neurons.

Increased peristalsis is also partially controlled by higher centers, but a mechanism of peripheral action, along with the activation of postganglionic cholinergic receptors and, possibly, inhibition of dopaminergic receptors of the stomach and small intestine may also be partially involved. Through the hypothalamus and the parasympathetic nervous system, it regulates and coordinates motor activity of the upper part of the gastrointestinal tract: increases the tone of the stomach and intestine, accelerates gastric emptying, reduces gastrostasis, prevents pyloric and esophageal reflux, encourages intestinal peristalsis. Normalizes secretion of bile, reduces the spasm of the Oddi sphincter without changing its tone, eliminates gallbladder dyskinesia.

Adverse effects apply mainly to extrapyramidal symptoms, which are based on the mechanism of dopamine-receptor-blocking impact on the central nervous system.

Long-term metoclopramide treatment may cause an increase in serum prolactin concentration due to the lack of dopaminergic inhibition of prolactin secretion. There have been case reports on galactorrhea and menstrual cycle disorders in women, in men - gynecomastia. However, these symptoms disappeared after discontinuation of treatment.

Onset of action on the gastrointestinal tract occurs within 1-3 minutes after intravenous administration and 10-15 minutes after intramuscular injection. Antiemetic effect lasts for 12 hours. 13-30 % of the medicinal product binds to blood plasma proteins. The volume of distribution is 3.5 l/kg. Crosses blood-brain and placental barriers, enters breast milk. It is metabolized in the liver. Half-life is 4-6 hours. Part of the dose (approximately 20 %) is excreted in its original form, and the rest (approximately 80 %) after metabolic transformations in the liver is excreted by the kidneys in compounds with glucuronic or sulfuric acid.

Accumulation of metoclopramide was observed in patients with cirrhosis, which occurred along with a 50 % decrease in blood plasma clearance.

Due to the fact that the medicinal product contains sodium sulfite, it should not be administered to the sulfite-hypersensitive asthmatic patients.

Interaction with other medicinal products and other types of interaction.

Levodopa or dopaminergic agonists and metoclopramide have a mutual antagonism.

Combinations to be avoided.

Attention should be drawn to the following combinations.

When used concurrently with oral medicines, such as paracetamol, metoclopramide may affect their absorption caused by gastric motility being affected.

Neuroleptics: metoclopramide in combination with other neuroleptics may induce a cumulative effect and extrapyramidal disorders.

Digoxin: metoclopramide may decrease digoxin bioavailability. Concentration of digoxin in the blood plasma should be closely monitored.

Cyclosporine: metoclopramide increases cyclosporin bioavailability (Cmax by 46 % and effect by 22 %). Concentration of cyclosporin in blood plasma should be closely monitored. Clinical consequences of this phenomenon have not been definitively identified.

Mivacurium and Suxamethonium: injection of metoclopramide may increase the duration of the neuromuscular block (due to inhibition of blood plasma cholinesterase).

Since injection solution contains sodium sulfite, thiamine (vitamin B1), taken concomitantly with metoclopramide, can be rapidly degraded in the body.

Special precautions for use.

The medicinal product should not be used in the treatment of chronic diseases such as gastroparesis, dyspepsia and gastroesophageal reflux disease, or as an adjunct for surgical or radiological procedures.

Patients under 30 years of age are more prone to develop dystonic and dyskinetic disorders in the metoclopramide treatment.

Care should be taken when prescribing the medicinal product to elderly patients due to the frequent occurrence of parkinsonism.

Extrapyramidal disorders may occur, especially in children, and/or at high doses. These reactions are usually observed in early treatment and may occur after a single use. If extrapyramidal symptoms develop, metoclopramide must be immediately withdrawn.  In general, these effects disappear completely after the termination of treatment, but may require symptomatic treatment (benzodiazepines in children and/or anticholinergic anti-Parkinsonian medicinal products in adults).

Between each administration of metoclopramide, even in the event of vomiting and rejection of the dose, it is necessary to maintain at least a 6-hour interval in order to avoid an overdose.

Special care should be given to patients with concomitant neurological diseases, as well as to patients being treated with other medicinal products affecting central nervous system.

Administration of metoclopramide may also exacerbate the symptoms of Parkinson's disease.

There have been case reports of methemoglobinemia that may be due to a deficiency of NADH-cytochrome-b5-reductase. In such cases, administration of metoclopramide must be terminated immediately and appropriate measures taken (for example, treatment with methylene blue).

There have been reports of severe adverse reactions from the cardiovascular system, including cases of acute vascular insufficiency, severe bradycardia, cardiac arrest, and the QT interval prolongation that have been observed after taking metoclopramide in the form of an injection, especially after administration.

Intravenously, the medicinal product should be given in the form of a slow bolus injection (minimum for 3 minutes) to reduce the risk of adverse reactions (e.g., hypotension, akathisia).

At-risk patients, namely, elderly patients with cardiac conduction disorders, unadjusted electrolyte imbalance or bradycardia, and patients being treated with other medicinal products that extend the QT interval, should be administered the medicament cautiously.

The medicinal product should not be used for the treatment of chronic diseases such as gastroparesis, dyspepsia and gastroesophageal reflux disease, or as an adjunct in surgical or radiological procedures. Ampoules taken from the package cannot be exposed to the sun for long.

When using the medicinal product, one should avoid potentially hazardous activities that require increased attention (driving vehicles, operating other mechanisms).

Posology and method of administration

Inject the solution for injections intramuscularly or intravenously as a slow bolus injection for at least 3 minutes.

Use 0.9 % sodium chloride solution, 5 % glucose solution as the solvent.

Administer the medicament in a dose of 10 mg to 3 times a day. The maximum daily dose is 30 mg or 0.5 mg/kg body weight.

The use of injection forms should take the shortest possible period of time, with the fastest possible transition to the use of oral or rectal forms of metoclopramide.

When used to prevent postoperative nausea and vomiting, metoclopramide should be applied after surgery.

The recommended dose of metoclopramide is 0.1-0.15 mg/kg body weight to 3 times a day. The maximum daily dose is 0.5 mg/kg body weight. If it is necessary to continue the use of the medicament, at least 6-hour intervals should be maintained.

The maximum duration of metoclopramide application for the treatment of manifested postoperative nausea and vomiting is 48 hours.

The maximum duration of the metoclopramide application to prevent delayed nausea and vomiting induced by chemotherapy is 5 days.

In patients with the end-stage renal dysfunction (creatinine clearance ≤ 15 ml/min) metoclopramide dose should be reduced by 75 %.

In patients with moderate and severe renal dysfunction (creatinine clearance 15-60 ml/min), metoclopramide dose should be reduced by 50 %.

Patients with hepatic insufficiency, due to the half-life extension, should be administered a half dose.

Consideration should be given to reducing the dose in elderly patients, due to decreased renal and hepatic function caused by the age.

Metoclopramide is contraindicated in children under 1 year of age.

Treatment: extrapyramidal disorders are eliminated by the slow administration of the biperidene antidote. In case of large doses of metoclopramide, it must be removed from the gastrointestinal tract by gastric lavage or taking activated charcoal and sodium sulfate. The vital functions of the body shall be monitored until complete disappearance of poisoning symptoms.

Also, there is a risk of acute (short-term) neurological disorders, which is higher in children.

There have been individual reports on the possibility of developing severe cardiovascular reactions due to the use of metoclopramide, particularly when administered intravenously.

Blood and lymphatic system disorders: methemoglobinemia, which may be associated with a deficiency of NADH-cytochrome-b5-reductase, especially in infants, sulfgemoglobinaemia, which is associated mainly with the co-administration of high doses of medicinal products that release sulfur.

Immune system disorders: hypersensitivity reactions including anaphylactic reactions, including Quincke's edema, anaphylactic shock. Due to the presence of sodium sulfite in the dosage form, individual cases of hypersensitivity may occur, especially in asthmatic patients, such as nausea, vomiting, wheezing, an acute asthma attack, impaired consciousness or shock. These reactions may have an individual course.

Reproductive system and breast disorders: after a prolonged therapy with the medicinal product hyperprolactinemia, gynecomastia, galactorrhea, or menstrual disorder, amenorrhea may occur due to the stimulation of prolactin secretion; should these phenomena develop, discontinue administration of metoclopramide.

In adolescents and patients with severe renal impairment (renal failure) resulting in a delay of metoclopramide excretion, particular attention must be paid to the development of side effects. In the event of their occurrence, the use of the medicament should be discontinued immediately.

The risk of developing adverse reactions in the nervous system increases with the use of the medicinal product in high doses and its long-term use.

Store in the original package at temperature not above 25 °C. Keep out of reach of children. Do not freeze.

Date of the last revision. 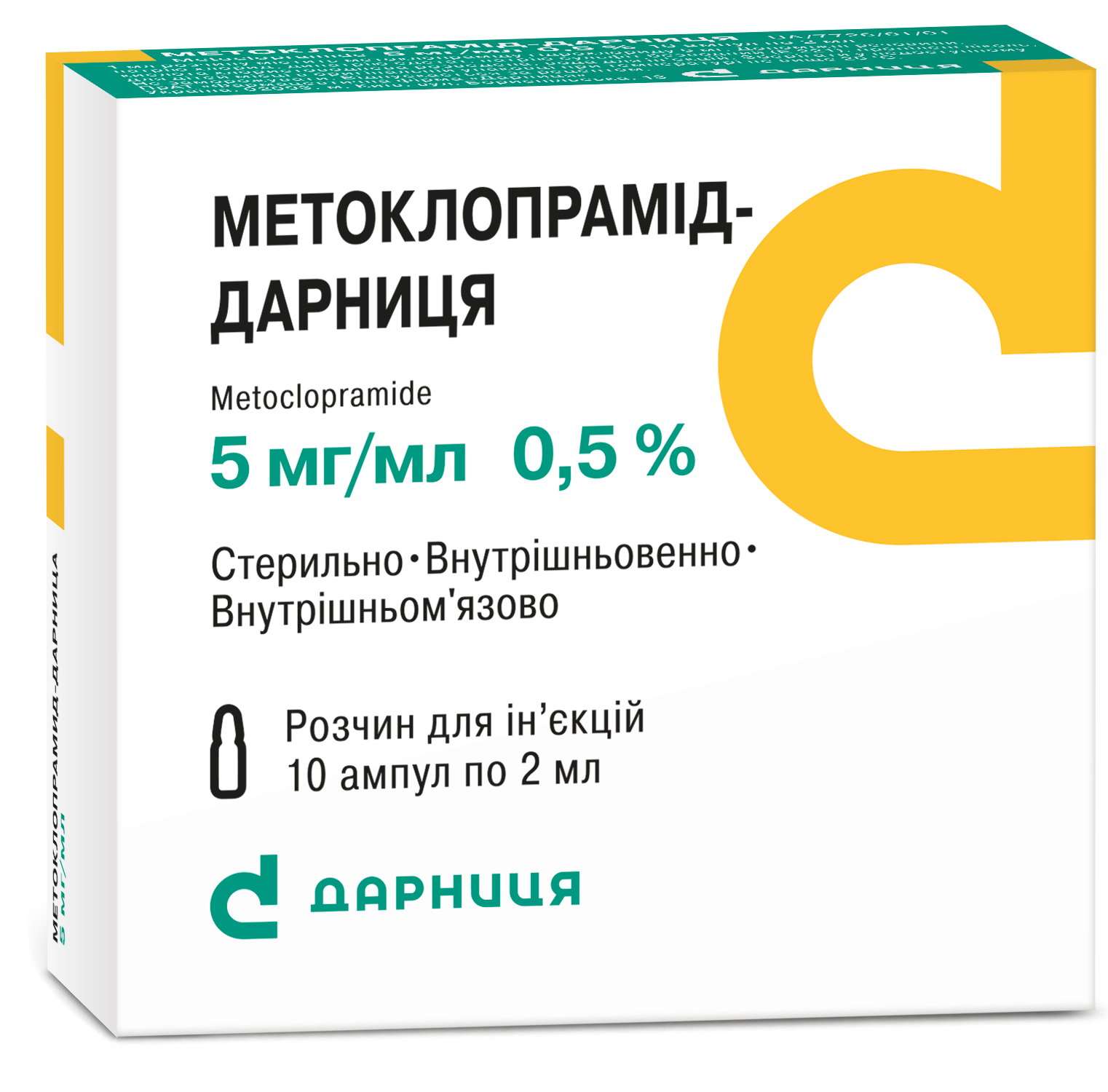 Metoclopramide is a central dopamine antagonist that also shows peripheral cholinergic activity. There are two main effects of the drug: antiemetic action and the effect of accelerating stomach emptying and passing through the small intestine. The antiemetic action is caused by the effect on the central point of the brain stem (chemoreceptors - the activating zone of the vomiting center), probably due to the inhibition of dopaminergic neurons.

Instructions(available in Ukrainian)
Buy at Liki24 Buy at apteka24.ua
Indications Method of administration

The drug shouldn’t be used for treatment of chronic diseases, such as gastroparesis, dyspepsia and gastroesophageal reflux disease, or as an adjunct in surgical or radiological procedures.

Patients under 30 years of age are more likely to develop dystonic and dyskinetic disorders when treated with metoclopramide.

Caution should be exercised when prescribing to elderly patients due to the increased incidence of parkinsonism.