Order of the Ministry

of Healthcare of Ukraine

PACKAGE LEAFLET
for medical use of a medicinal product

After oral administration, the drug is rapidly and completely absorbed in the digestive tract. Bioavailability is 92-99%, and it may increase slightly when taken with food.

The maximum concentration of spironolactone in the blood serum is observed after 2.6 hours and is 80 ng/mL. Binding to plasma proteins is about 90 %. The elimination half-life is 1,3 hours.

It is excreted from the body in the form of metabolites mainly by renal excretion, a small part is excreted in the feces. Spironolactone is characterized by a cumulative effect.

Concomitant use of spironolactone with other medications can lead to:

with antihypertensive agents (especially with ganglioblockers, nicardipine, nimodipine) – excessive decrease in blood pressure; with simultaneous use, the dose of antihypertensive agents should be reduced and then corrected, if necessary. Since angiotensin-converting enzyme (ACE) inhibitors reduce the production of aldosterone, drugs of this group should not be used together with spironolactone on a permanent basis, especially in patients with impaired renal function;

with other diuretics – increased diuretic effect;

with nonsteroidal anti-inflammatory drugs – an increased risk of hyperkalemia and renal failure with a concomitant decrease in the diuretic, natriuretic and antihypertensive effects of spironolactone; when used concomitantly with acetylsalicylic acid, prostaglandin synthesis is also suppressed, with antipyrine – its metabolism in the liver increases;

with α-and β-adrenomimetics, carbenoxolone – weakening of the action of spironolactone;

with terfenadine – increase of the risk of ventricular arrhythmia due to hypokalemia and an imbalance of other electrolytes;

with carbamazepine – increase of the risk of hyponatremia;

with digoxin – increase of the risk of glycoside intoxication due to prolongation of its half-life;

with lithium preparations – increase of the risk of intoxication due to a decrease in renal clearance of lithium; these medications should not be used concomitantly;

with triptorelin, buserelin, gonadorelin – enhancement of the effect of the latter;

with the combination of trimethoprim/sulfamethoxazole (antibiotic called co-trimoxazole) – development of clinically significant hyperkalemia;

with immunosuppressants, cyclosporine and tacrolimus – increase of the risk of hyperkalemia caused by spironolactone;

with colestyramine, ammonium chloride – increase of the risk of hyperkalemia and hyperchloremic metabolic acidosis;

with nitroglycerin, other nitrates or vasodilators – increase of the antihypertensive effect of spironolactone;

with pressor amines (norepinephrine) –  reduction of vascular responses to norepinephrine. For this reason, caution should be exercised when performing local or general anesthesia in patients taking spironolactone;

The use of the drug, especially in patients with impaired renal function, can cause a transient increase of urea nitrogen content in blood plasma and hyperkalemia, which can lead to the development of cardiac arrhythmias and reversible hyperchloremic metabolic acidosis. The drug should be used with caution in patients with impaired renal, hepatic function and elderly patients. The level of electrolytes in the blood plasma and kidney function indicators should be periodically determined. If hyperkalemia develops, treatment with spironolactone should be discontinued.

The drug should be used with caution in patients whose existing diseases may cause the development of acidosis and/or hyperkalemia.

Concomitant use of spironolactone with drugs that cause hyperkalemia (for example, other potassium-sparing diuretics, ACE inhibitors, angiotensin II receptor antagonists, aldosterone blockers, heparin, low-molecular-weight heparin, potassium preparations, a potassium-rich diet, the use of salt substitutes containing potassium) can lead to the development of severe hyperkalemia.

Hyperkalemia can be fatal. It is critically important to monitor and adjust potassium levels in patients with severe heart failure receiving spironolactone. The drug should not be administered together with other potassium-sparing diuretics. Potassium preparations are contraindicated in patients with serum potassium levels above 3.5 mEq/L. The recommended frequency for determining potassium and creatinine levels is one week after starting or increasing the dose of spironolactone, monthly for the first 3 months, then quarterly for a year, and then every 6 months. If the serum potassium level is greater than 5 mEq/L or the creatinine level is greater than 4 mg/dL, spironolactone should be temporarily or completely discontinued.

The drug should be used with caution in patients with diabetes mellitus, especially in the presence of diabetic nephropathy.

Spironolactone therapy can impair the process of determining the concentration of cortisol, epinephrine and digoxin (by radioimmunological methods).

Long-term unjustified use of the drug should be avoided, since, according to studies, long-term use of spironolactone in animals in maximum doses contributed to the development of carcinoma and myeloid leukemia.

During the use of the drug, it is forbidden to drink alcoholic beverages.

SPIRTSA-DARNITSA contains lactose, so patients with rare hereditary forms of galactose intolerance, lactase deficiency or glucose-galactose malabsorption syndrome should not use the drug.

In patients with porphyria, spironolactone should be used with extreme caution, as many medications provoke an exacerbation of porphyria.

Fertility, pregnancy and lactation. The drug is contraindicated during pregnancy or lactation.

During the initial period of drug administration, the duration of which is individual, driving vehicles or other mechanisms is contraindicated.

The duration of the course of treatment is individual, in some cases it can reach several years, and it is necessary to use the drug in the lowest effective daily dose, provided that the electrolyte composition of the blood serum and kidney function indicators are constantly monitored.

When preparing for surgery, the drug should be used at a dose of 100-400 mg per day.

If surgical treatment is not possible, spironolactone can be used for a long time as maintenance therapy at the lowest effective dose, which is determined individually.

In this case, the initial dose can be reduced every 14 days until the minimum effective dose is reached. In long-term treatment, it is recommended to use the drug in combination with other diuretics to reduce side effects.

The drug should be used at an initial dose of 100 mg a day divided into 1 or 2 administrations. The daily dose can also range from 25 to 200 mg.

In case of higher doses, the drug can be used in combination with other diuretics acting in the more proximal parts of the renal tubules. In this case, the dose of spironolactone should be adjusted.

The drug should be used at an initial dose of 50-100 mg per day in 1 or 2 administrations in combination with other antihypertensive drugs. Treatment should be continued for at least 2 weeks, since the maximum antihypertensive effect is achieved by the end of this period. Further dose adjustment is individual, depending on the achieved effect.

The drug should be used at a dose of 25-100 mg per day in patients who do not have enough dietary supplements with potassium or other methods of potassium replacement therapy.

If it is necessary to use the drug in children under 3 years of age, the tablet should be crushed, dissolved and given to the child to drink in the form of a suspension.

The drug is recommended to be used in lower doses, followed by a gradual increase until the maximum effect is achieved. It should be taken into account that in this category of patients there are hepatic and renal disorders that can affect the metabolism and excretion of the drug.

The drug is used in pediatric practice as prescribed by a physician.

Treatment: symptomatic therapy. Water-electrolyte and acid-base balances should be maintained: potassium-eliminating diuretics should be used, glucose and insulin should be administered parenterally, and in difficult cases hemodialysis should be performed. There is no specific antidote.

Special precautions for storage. Store in the original package at temperature not above 25 ºC.

Keep out of reach of children

Nature and contents of container. . 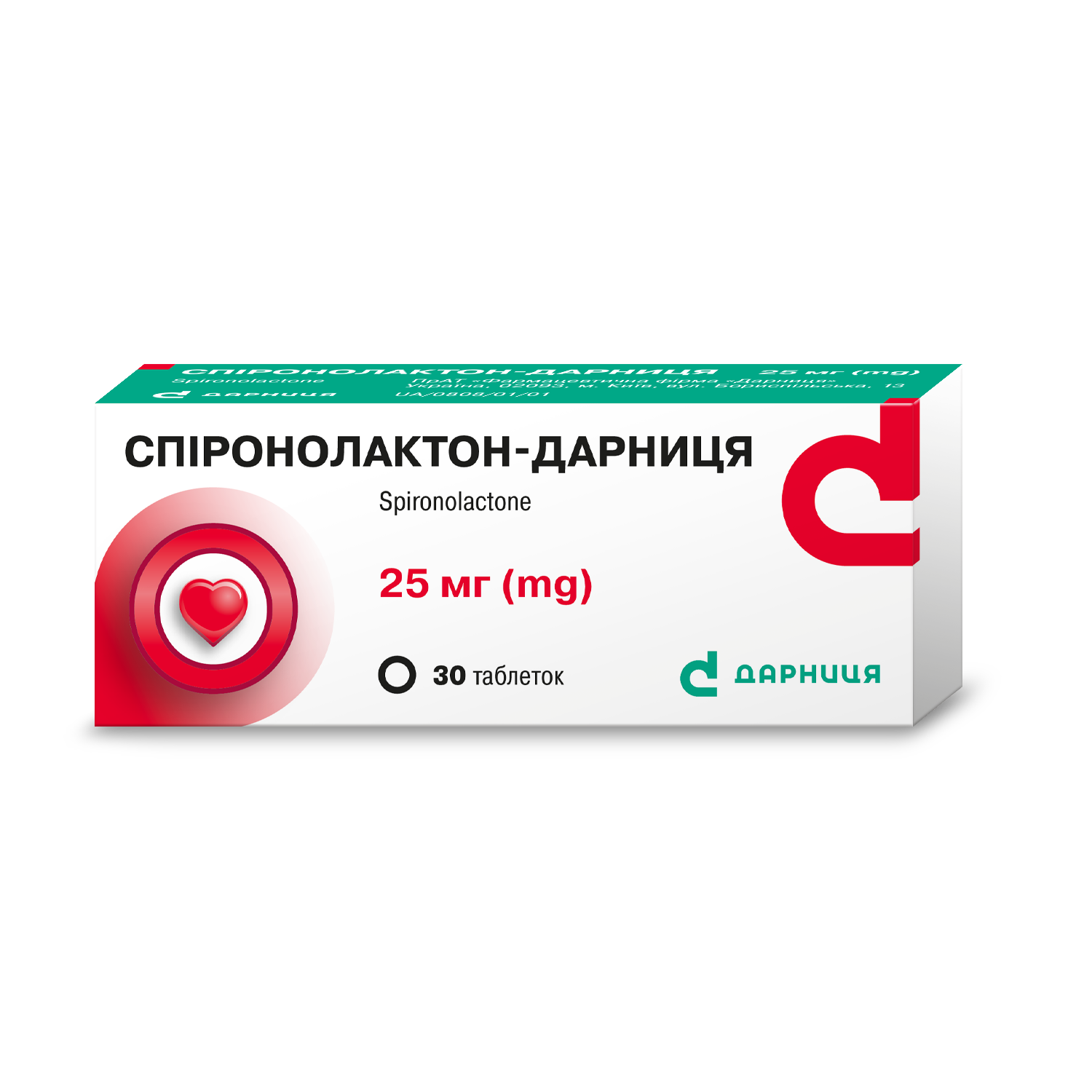 – Primary hyperaldosteronism.
– Congestive heart failure — if other diuretics are ineffective or not tolerated, or if their efficacy needs to be enhanced.
– Essential hypertension, mainly with hypokalemia — usually in combination with other antihypertensive drugs.
– Hepatic cirrhosis accompanied by oedema and/or ascites.
– Oedemas caused by nephrotic syndrome.
– Hypokalemia — if other therapy is not possible.
– Prevention of hypokalemia in patients who receive cardiac glycosides — if other methods of therapy are considered inappropriate or inadvisable.