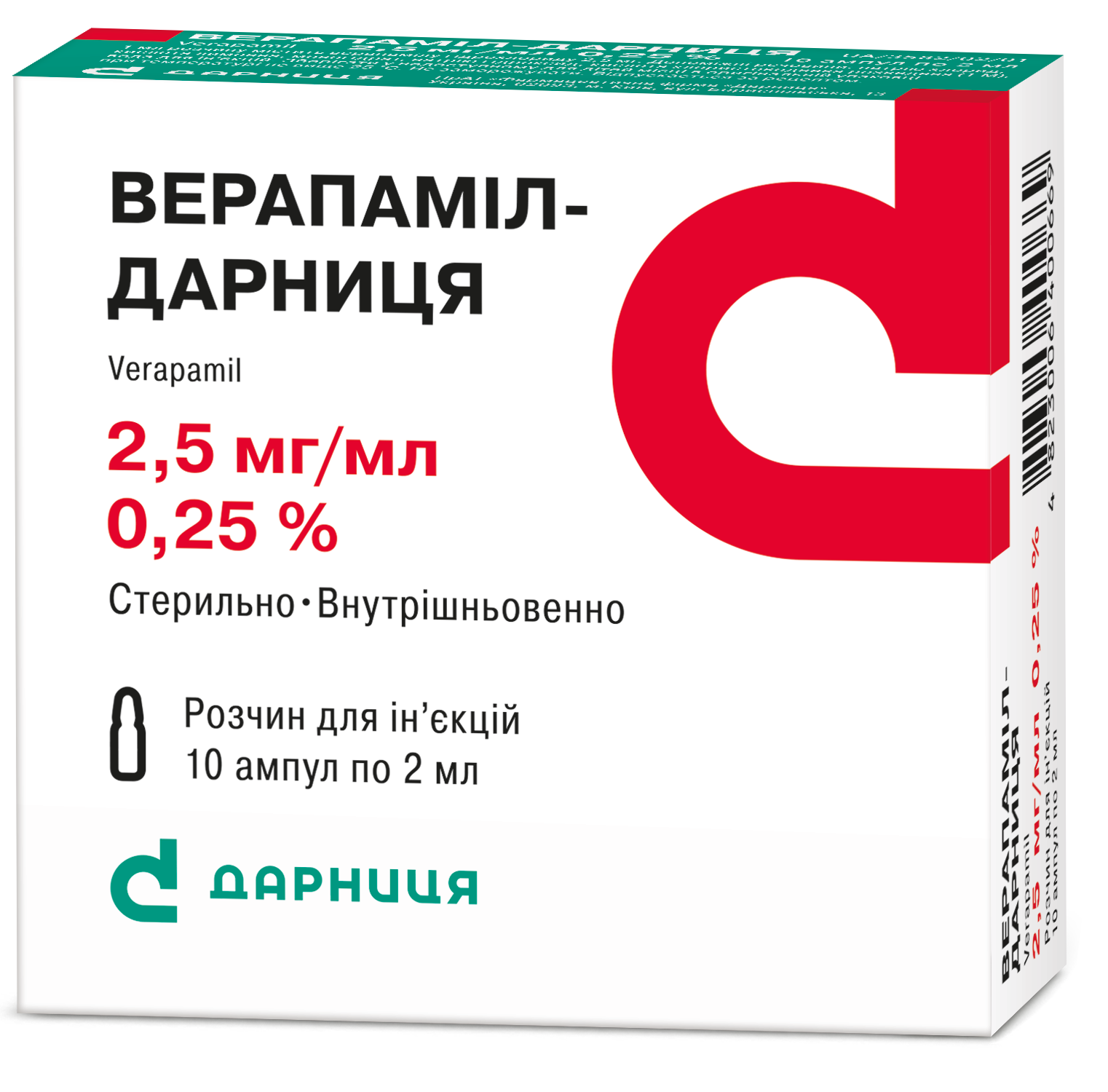 Unstable angina in patients for whom nitrates and/or β˗blockers are contraindicated, including vasospastic angina, Prinzmetal's variant angina.

In children: in paroxysmal supraventricular tachycardia.

Intravenous administration should be performed slowly (in no less than 2 minutes) under observation of medical professionals, with ECG and blood pressure monitoring. Patients who have received verapamil intravenously as the initial treatment of unstable angina should be switched to oral verapamil as soon as possible.

The recommended doses for adults and adolescents with a body weight of over 50 kg are: the initial dose is 5 mg of verapamil hydrochloride (corresponding to 2 mL of Verapamil-Darnitsa, solution for injection); if necessary, another 5 mg can be injected after 5–10 minutes. If necessary, further administration by intravenous drip of 5–10 mg of Verapamil-Darnitsa diluted in 0.9% sodium chloride solution is possible over 1 hour; another diluent can be 5% glucose with pH < 6.5. The average daily intramuscular dose should not exceed 100 mg of verapamil hydrochloride.

In patients with impaired liver function, the bioavailability of verapamil increases significantly. In such cases, the dose should be determined with caution.

ml of the solution contains 2.5 mg of verapamil hydrochloride;

Verapamil, the active substance of the drug, blocks the transmembrane flow of calcium ions into cardiomyocytes and vascular smooth muscle cells. It directly reduces the need for oxygen in the myocardium by affecting the energy-consuming processes of metabolism in myocardial cells and indirectly reduce the afterload.

Verapamil exerts antihypertensive effects by decreasing the peripheral vascular resistance without increasing in heart rate as a reflex response. Undesirable changes in the physiological values of blood pressure are not observed.

The drug has a pronounced antiarrhythmic effect, especially in supraventricular arrhythmia. It delays the conduction of the impulse in the atrioventricular node, as a result of which, depending on the type of arrhythmia, the sinus rhythm is restored and/or the frequency of ventricular contractions is normalized.

Unstable angina including vasospastic angina, variant angina, Prinzmetal's angina in patients who are contraindicated to use nitrates and/or β-adrenoblockers.

Severe conduction disorders: II and III degree of sinoatrial or atrioventricular block, except in patients with a functioning artifical pacemaker.

Sick sinus syndrome, except in patients with a functioning artifical pacemaker.

Hypersensitivity to verapamil or to any other drug components.

It is contraindicated to use intravenously in patients on β-adrenoblockers (excepting emergency treatment).

In case of acute coronary insufficiency, intravenous administration of the drug should be thoroughly justified (it is necessary to exclude the possibility of myocardial infarction), and the patient's condition should be closely monitored.

Quinidine: reduction of oral clearance of quinidine (~35 %). Hypotension may develop, and pulmonary edema may occur in patients with hypertrophic obstructive cardiomyopathy.

Propranolol: increase of AUC of propranolol (~65 %) and Cmах (~94%) in patients with angina pectoris.

Antiviral (HIV) agents: plasma concentrations of verapamil may be increased. Prescribe with caution or it may be necessary to reduce the dose of verapamil.

Colchicine: co-administration with verapamil is not recommended due to increased colchicine exposure.

Inhalation anesthetics: should be administered with caution to prevent excessive inhibition of cardiovascular activity.

Sulfinpyrazone: increased oral clearance of verapamil by 3 times, and bioavailability by 60 %. There may be a decrease in the hypotensive effect.

Neuromuscular blockers: possible potentiation of the effect due to verapamil hydrochloride.

Atorvastatin: may increase the level of atorvastatin. Atorvastatin increases the AUC of verapamil by approximately 42.8 %.

Fluvastatin, pravastatin, and rosuvastatin are not metabolized by cytochrome CYP3A4 and do not interact with verapamil.

Antidiabetic drugs (glyburide): increased Cmax of glyburide by approximately 28 %, AUC – by 26 %. Theophylline: reduction of oral and systemic clearance by approximately 20 %, in smokers – by 11 %. Imipramine: increase of AUC (~15 %) without affecting the active metabolite desipramine.

Phenobarbital: increases the oral clearance of verapamil by 5 times.

Buspirone: increased the AUC and Cmах by 3-4 times.

Midazolam: increased the AUC by 3 times and the Cmax by 2 times.

Everolimus, sirolimus, tacrolimus: possible increase of the level of these drugs.

When prescribing verapamil and determining its dose, special attention should be paid to patients with the following conditions:

Intravenous administration of verapamil hydrochloride often leads to a decrease in blood pressure below the initial values, which is usually transient and asymptomatic, but can manifest as dizziness.

In patients without sick sinus syndrome, asystole is usually short (a few seconds or less) with a spontaneous return to atrioventricular node or normal sinus rhythm. If this event persists, appropriate therapy should be initiated immediately.

Verapamil hydrochloride prolongs the period of conduction through the atrioventricular node. The development of II-III degree atrioventricular block or 1-, 2 - or 3-bundle block requires further dose reduction or discontinuation of verapamil therapy and appropriate treatment, if necessary.

In the case of mild heart failure it should be controlled with cardiac glycosides and diuretics before administration of verapamil hydrochloride. Patients with moderate to severe heart failure may experience acute worsening of heart failure.

Since cardiac glycosides and verapamil hydrochloride prolong AV conduction, patients should be monitored for AV block and bradycardia.

Disopyramide should not be administered within 48 hours before or 24 hours after verapamil administration.

During the use of the drug, grapefruit containing food and beverages should be avoided. Grapefruit may increase the plasma level of verapamil hydrochloride.

At the beginning of therapy, Veradar-Darnitsa solution for injection should be used only in a hospital where it is possible to carry out resuscitation measures. Patients receiving intravenous verapamil should be controlled by electrocardiographical and hemodynamic monitoring.

The drug should not be administered in the first and second trimesters of pregnancy. Administration in the third trimester of pregnancy – only if absolutely necessary, when the benefit exceeds the risk for mother and child. Verapamil passes through the placenta and is detected in the umbilical cord blood.

Biologically active substance is excreted in human breast milk. Limited human data from oral administration has shown that the infant relative dose of verapamil is low (0.1-1 % of the mother's oral dose) and that verapamil use may be compatible with breastfeeding. Due to the potential for serious adverse reactions in nursing infants, verapamil should only be used during lactation if it is essential for the welfare of the mother.

Due to the possibility of an individual reaction to the drug, the ability to react may be changed and impaired performing other work that requires increased attention, the speed of mental and motor reactions.

Intravenous administration should be done by slow injection (at least 2 minutes) under the supervision of medical personnel, under ECG and blood pressure monitoring. Patients receiving verapamil intravenously as an initial treatment for unstable angina should be transferred to oral verapamil as soon as possible.

Recommended doses for adults and adolescents with body weight greater than 50 kg:

the initial dose is 5 mg of verapamil hydrochloride (which corresponds to 2 ml of Veradar-Darnitsa, solution for injection); inject another 5 mg after 5-10 minutes, if necessary. If necessary, further drop infusion of 5-10 mg of Veradar-Darnitsa, diluted in 0.9 % sodium chloride solution, during 1 hour is possible; another solution for dilution may be 5 % glucose solution with pH <6.5. The average daily dose for intravenous administration should not exceed 100 mg of verapamil hydrochloride.

In patients with impaired liver function, the bioavailability of verapamil increases significantly. In such cases, the dose should be determined with caution.

In case of tachycardia associated with heart failure, digitalization should be performed before intravenous administration.

Administration of the drug should be discontinued immediately after the onset of the effect.

Controlled studies of verapamil hydrochloride in children have not been conducted.

Caution should be exercised when prescribing verapamil hydrochloride, solution for injection, to children.

Symptoms of verapamil poisoning due to overdose depend on the amount of medication administered, the time when detoxification measures were taken, and the age of patient.

Therapeutic measures should include eliminating the substance from the body and restoring the stability of the cardiovascular system.

General measures: gastric lavage is recommended even if more than 12 hours have passed since the drug administration and the motility of the digestive tract is not determined (no intestinal noises). General resuscitation measures include indirect heart massage, artificial respiration, defibrillation, and cardiac pacing. Hemodialysis is not indicated. Hemofiltration and, possibly, plasmapheresis may be useful (calcium antagonists bind well to plasma proteins).

Special measures: elimination of cardiodepressive effects, hypotension and bradycardia. The specific antidote is calcium: intravenously inject 10‑20 ml of 10 % solution of calcium gluconate (2.25‑4.5 mmol). If necessary, the administration can be repeated or an additional drop infusion can be performed (for example, 5 mmol/h).

Additional measures: in grade II and III AV block, sinus bradycardia, cardiac arrest, use atropine, isoprenaline, orciprenaline or cardiac pacing. In case of hypotension due to cardiogenic shock and arterial vasodilation, should be used dopamine (up to 25 μg/kg per minute), dobutamine (up to 15 μg/kg per minute) or norepinephrine. Serum concentration of calcium should correspond to the upper limit of normal or be slightly higher than normal. Due to vasodilation, a replacement liquid (Ringer's solution or 0.9 % sodium chloride solution) is administered at the early stages.

Verapamil is not removed during hemodialysis.

Hepatobiliary disorders: allergic hepatitis with a reversible increase in liver enzymes is possible.

Others: weight gain, agranulocytosis, transient vision loss on the background of maximum concentration of the drug in blood plasma, pulmonary oedema, asymptomatic thrombocytopenia.

In patients with a pacemaker, an increase in the Расіng-Sеnsіng (step-sensory) threshold due to the use of verapamil hydrochloride is not excluded.

Store in the original package at temperature not above 25 ºC. Keep out of reach of children. Do not freeze.