Main News Acetylsalicylic acid as the most common antithrombotic drug

Acetylsalicylic acid as the most common antithrombotic drug

World thrombosis day is celebrated in October. Its goal is to draw attention to the dangers of thrombosis, encourage people to visit doctors and not self-medicate. Thrombosis is the process of intravital formation of blood clots on the inner surface of the vessel wall.

Anti platelet (or antithrombotic) drugs reduce the ability of blood cells to stick together and adhere (way of adhesion) to the walls of blood vessels. They are used to prevent the formation of postoperative blood clots, thromboembolic disorders in ischemic heart disease and myocardial infarction, as well as in other diseases with an increased risk of thrombosis.

Acetylsalicylic acid (ASA) is a well-known representative of antithrombotic drugs. The drug has both anti-inflammatory and antipyretic actions. In addition, acetylsalicylic acid inhibits platelet aggregation and is used to prevent thrombus formation and thromboprophylaxis.

Back in 1966, doctors suggested that acetylsalicylic acid could be used to treat thrombosis. After World War II, California physician Lawrence Craven drew attention to the antithrombotic properties of acetylsalicylic acid. And until 1956, he systematized the data of 8 thousand patients who regularly took ASA, and in which heart attacks stopped. Today, ASA is one of the most widely known drugs against thrombosis.

In October 2021, the pharmaceutical company "Darnitsa" launched a new drug Cardio-Dar®***, which contains acetylsalicylic acid in a dosage of 75 mg and 150 mg. Indications for use:

Private Joint Stock Company Pharmaceutical company "Darnitsa" was founded in 1930 and this year celebrates its 91st anniversary. Since 1998, "Darnitsa" has been the leader in Ukraine in terms of drug production in physical terms. Strategic areas of portfolio development include cardiology, neurology, and pain management. During 2015-2020, "Darnitsa" launched 50 pharmaceutical brands on the market.

* The Global Burden of Disease Study, 2017, adapted from https://ourworldindata.org/causes-of-death

****The above information is intended exclusively for distribution in specialized publications intended for medical institutions and doctors, as well as at conferences and seminars on medical topics. 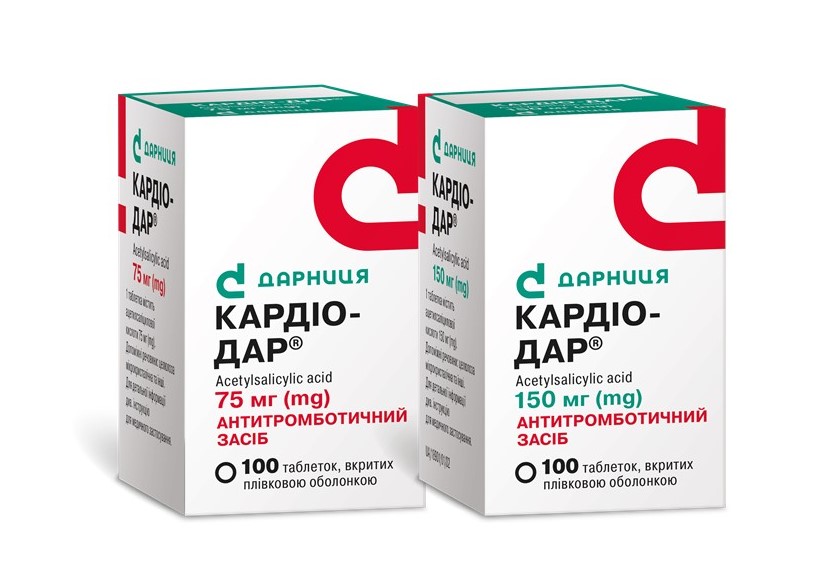