Did the war manage to destroy the national pharmaceutical industry?

The war like a litmus paper helps to determine which industries in Ukraine are strong enough to survive despite the global perturbations.

What does the pharmaceutical market look like in general? It has two big groups of buyers — people buying in the pharmacies and the government buying centrally for hospitals. The share of the pharmacy market is 87% in money at the end of the first quarter of 2022. During the invasion, the state's market share decreased by 4% due to the receipt of a large volume of humanitarian aid, a decrease in the number of people in Ukraine and working hospitals.

The annual market volume in general (retail and hospital purchases) amounted to 1.2 billion packages and 134.8 billion hryvnas in 2021. Compared to 2020, the market grew at a tremendous pace — by 20% in monetary terms for the year. The pharmaceutical market continued to show the growth at the beginning of 2022: 30‒45% in January and February.

The war caused the panic; therefore, people began to make the strategic reserves of the medicines. Accordingly, in the first days of the invasion, sales in the pharmacies increased rapidly, but starting March, the market is declining. Based on the results of five months of 2022, the market decreased to the level of last year in the money equivalent, as for the packages it shows a decline by almost 10% compared to the last year.

The war has also affected the consumption of medicinal products. Before the invasion the market demonstrated a high level of antibiotic use, now it has decreased. On the other hand, the consumption of sedatives increased significantly secondary to the war. Top sales are anti-inflammatory and anti-rheumatic products. In the first month of the war, the use of the medicinal products targeting the cardiovascular (+23%) and nervous system increased, primarily antiepileptics (+56%) and psycholeptics (+51%).

Based on the results of survey performed by robota.ua, 90% of pharmaceutical companies in Ukraine help the Armed Forces of Ukraine, the state, volunteers or volunteer themselves. For example, Darnitsa handed over 1.4 million packages of medicines for the needs of the Ministry of Health, medical organizations and charitable foundations.

At the beginning of full-scale military operations, a noticeable shortage of certain medicinal products (such as cardiovascular and systemic products) was observed. However, the logistic activities were fixed quite quickly, and the volume of consumption was restored. Currently, there is no shortage of medicinal products on the market.

Therefore, the national market survived despite the colossal consequences of the war and demonstrates stability in its further development.

*Based on the Proxima Research statistical data 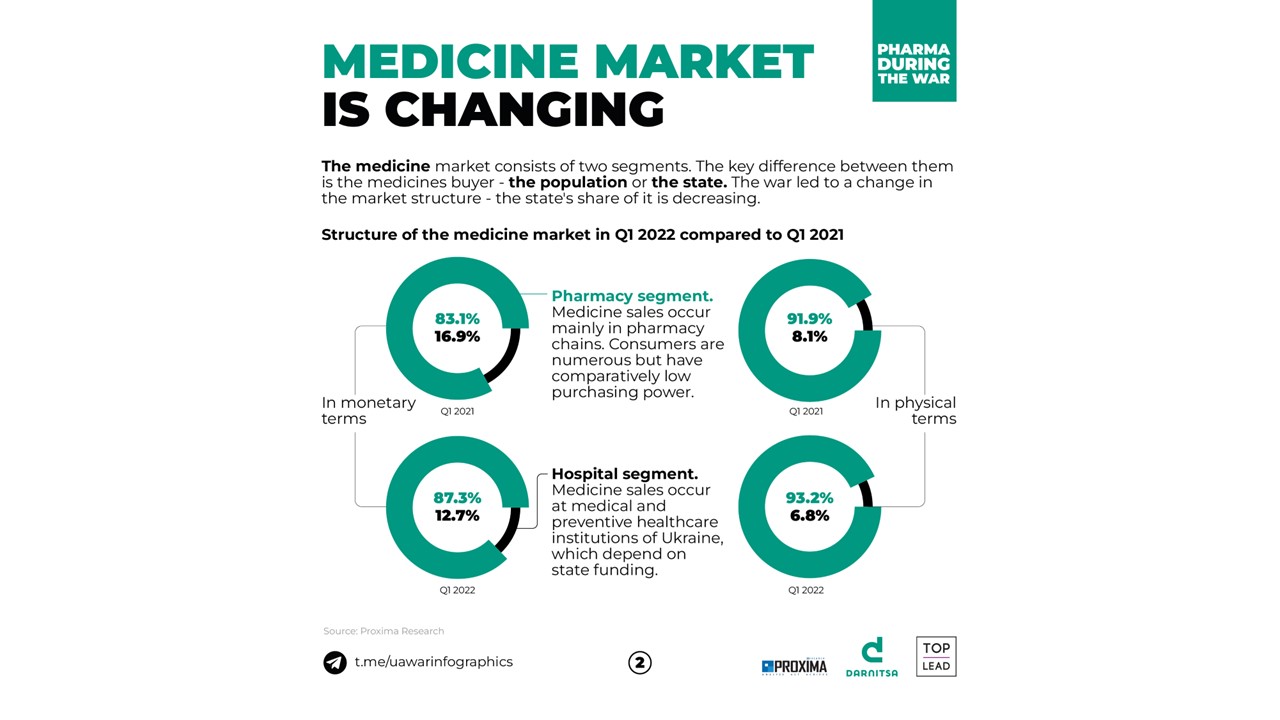 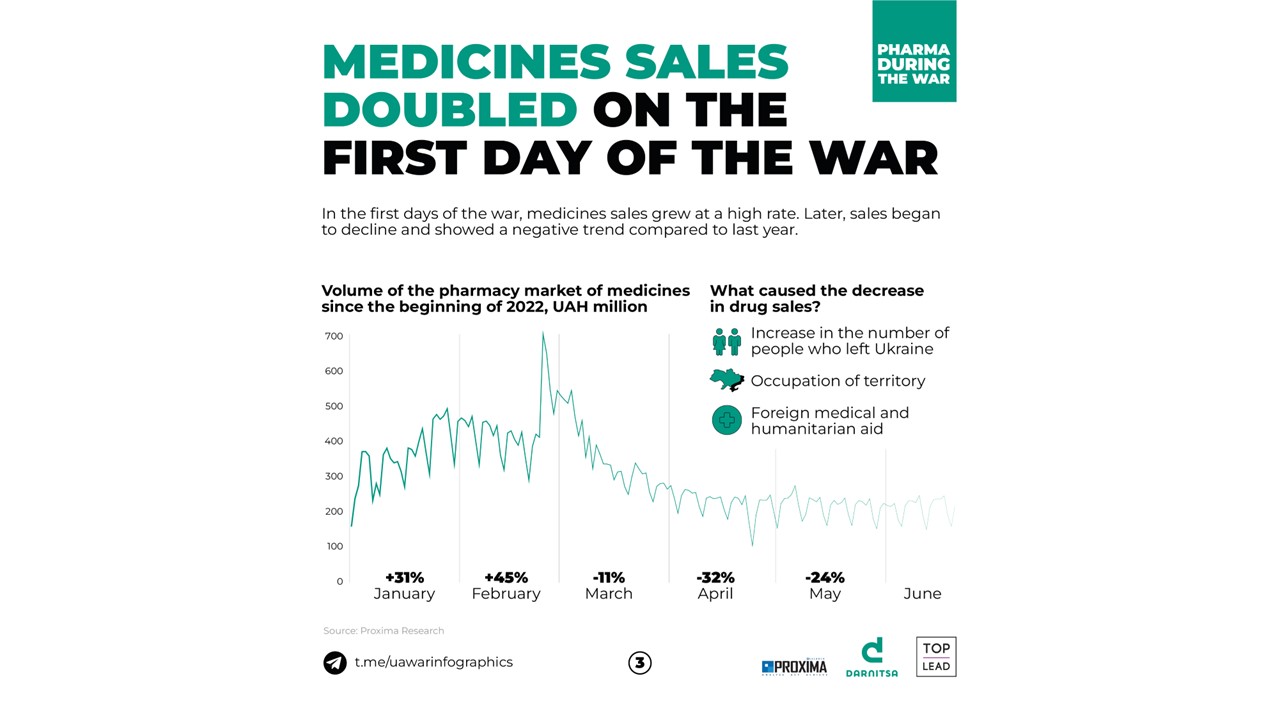 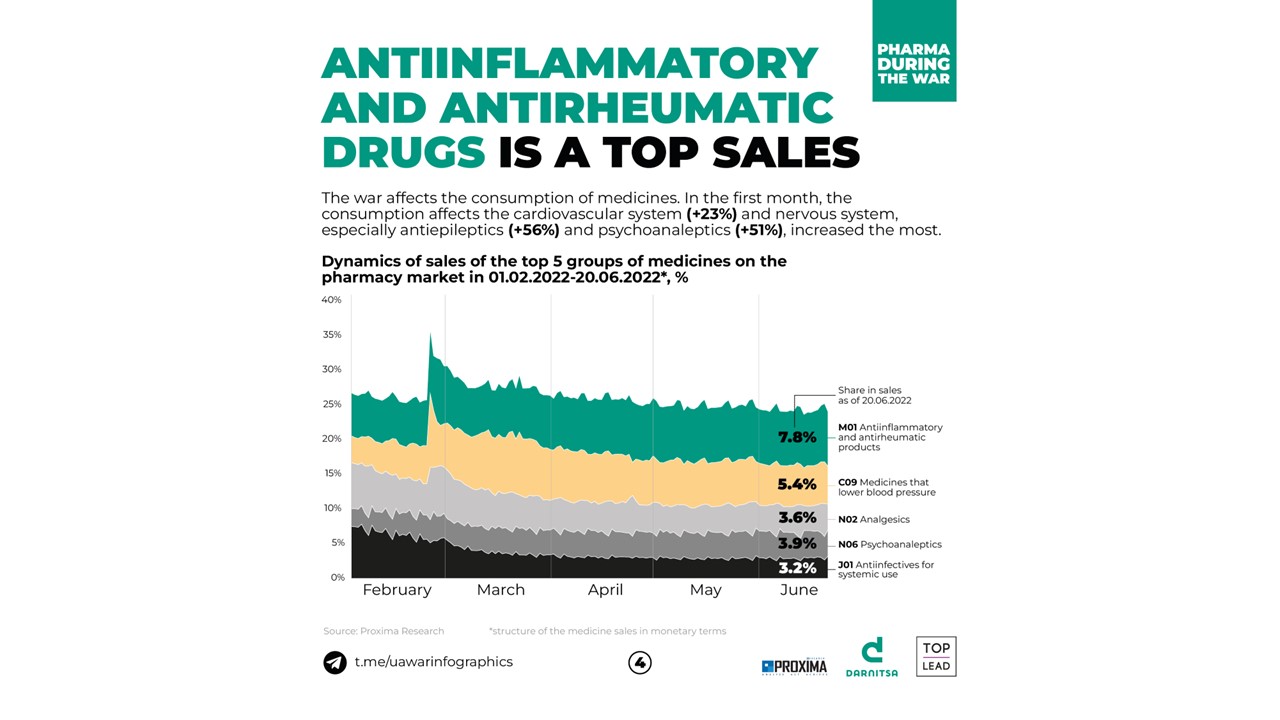 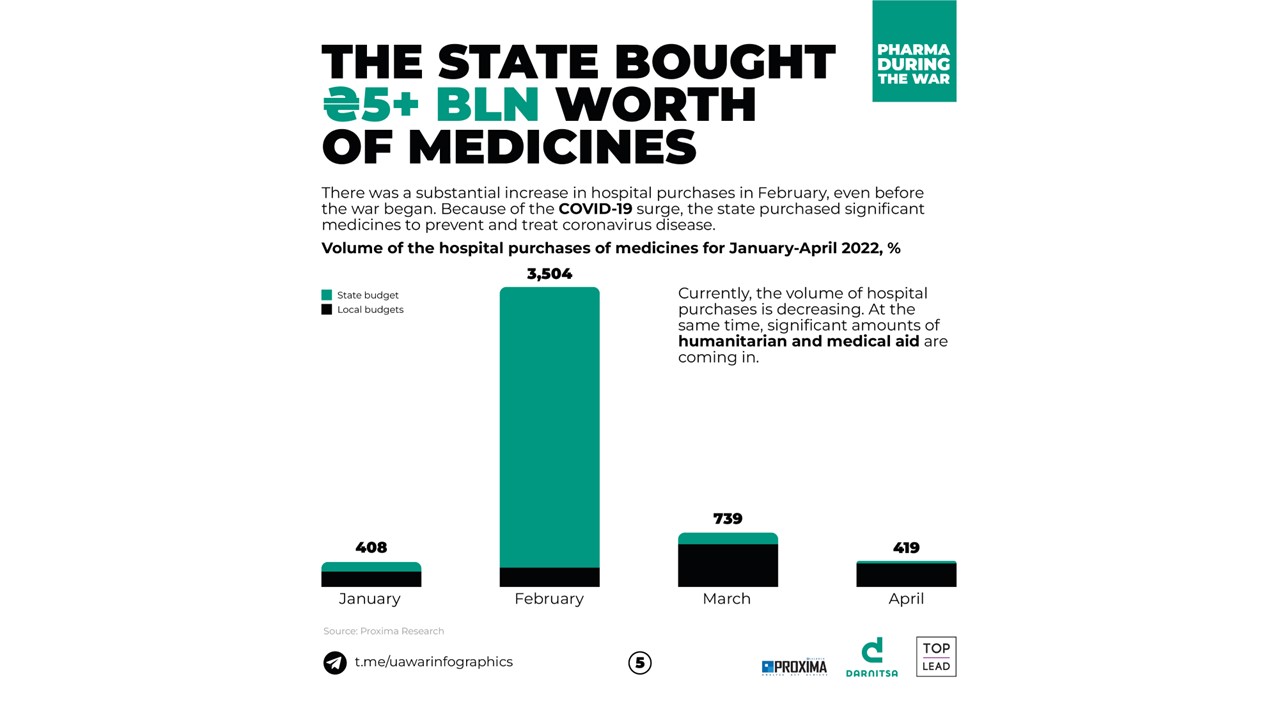 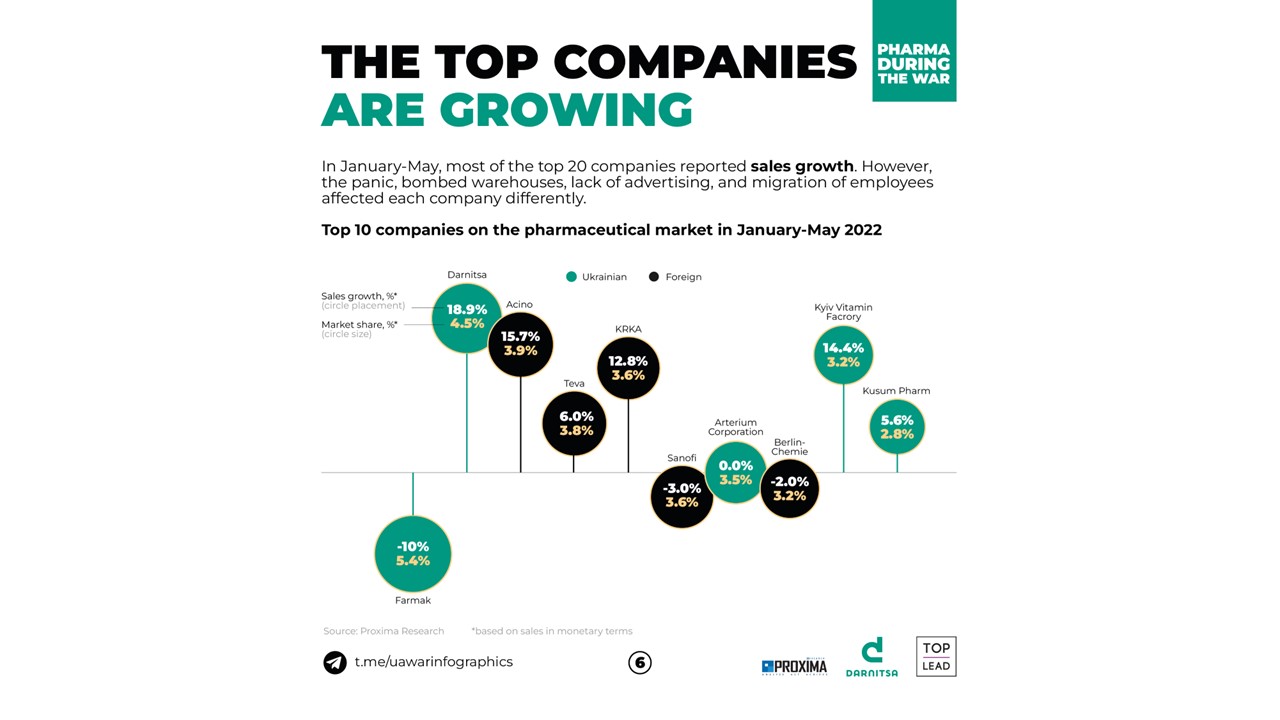 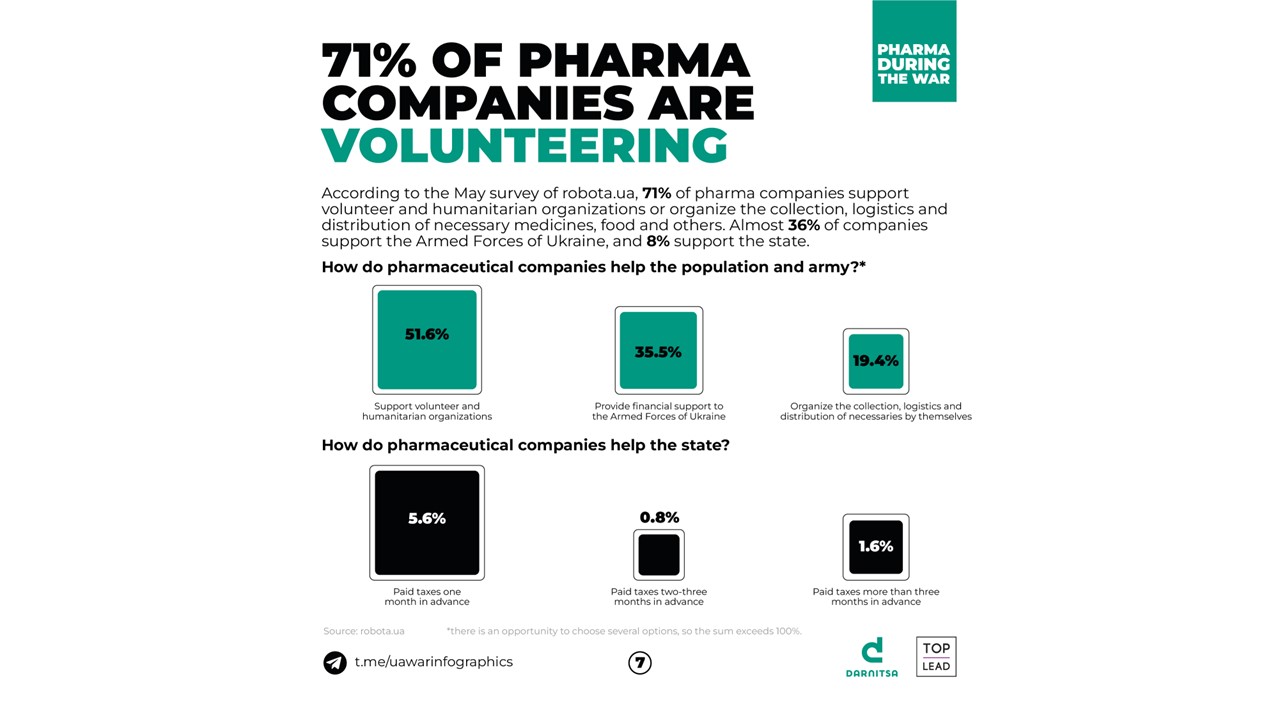 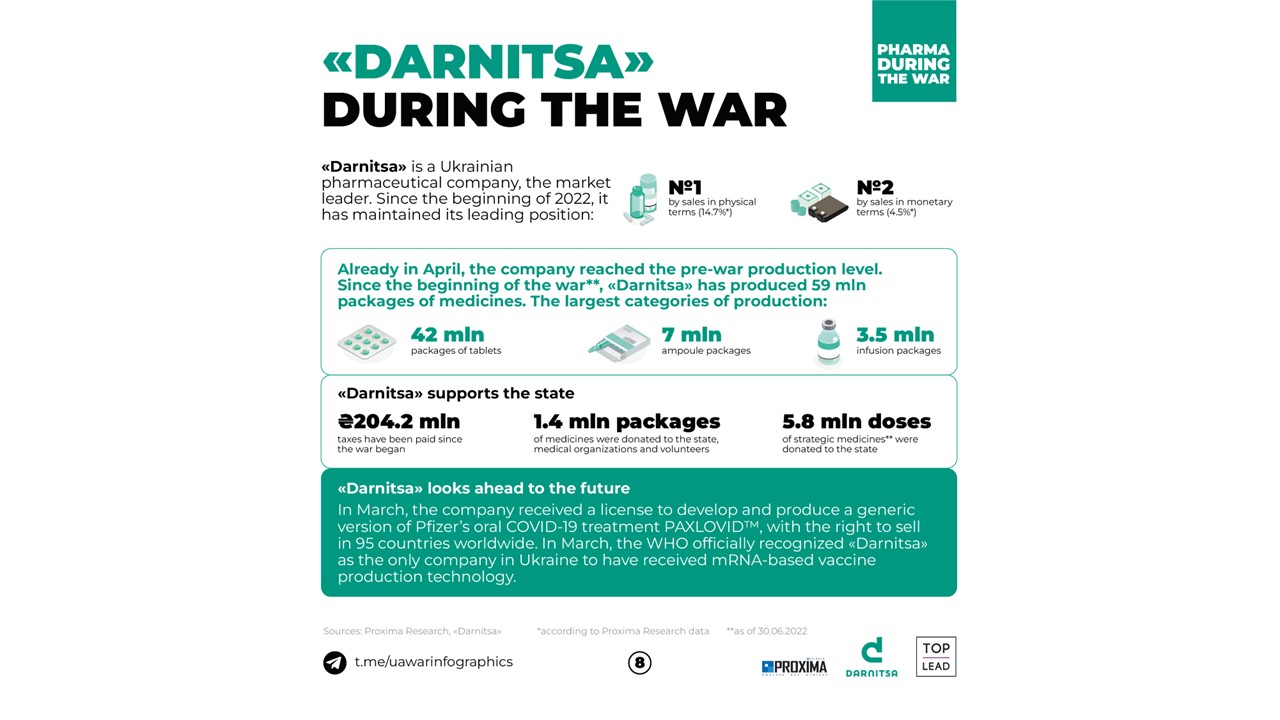