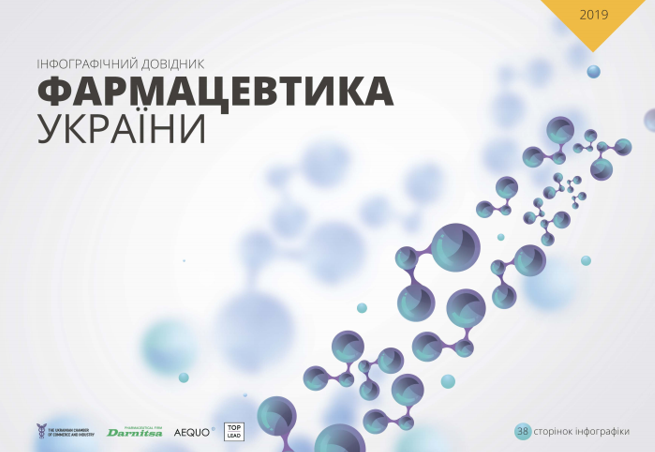 We present you the infographic reference book “Pharmaceuticals Industry of Ukraine 2019”.

It was prepared by Top Lead with the support of the Pharmaceutical Company Darnitsa, the Law Firm “Aequo” and the Chamber of Commerce and Industry of Ukraine. The reference book consists of three sections: “Pharmaceutical Production in Ukraine”, “Pharma Market of Ukraine", "Global Pharma Market and Foreign Trade".

The pharmaceuticals industry in Ukraine is the industry that develops the national economy. It employs only 0.15% of the total amount of man-power employed, but they create 0.83% of the country’s GDP and provide UAH 24 billion of added value.

It is arguable that the Ukrainian pharmaceutical business has overcome the crisis of 2014 and is rapidly recovering. Over the past three years, the industry has grown by an average of 11% per year, what is three times faster than the Ukrainian economy as a whole.

“Ukrainian pharma has a colossal potential. The market will grow in terms of both quantity and quality. We are looking for foreign strategic partners to gain access to modern innovative technologies. We are negotiating with the state to take part in state programs for the development of new medicinal products. It is projected that global annual sales of medicines will increase from the current $ 911 billion to $ 1.25 trillion by 2024. Ukraine will become a part of this growth,” Dmytro Shymkiv, the Chairman of the Executive Board of the Management Company of the PrJSC “Pharmaceutical Firm Darnitsa, commented.

The pharmaceuticals industry is among the top three industries that are leaders in terms of investment, slightly behind the food industry. From every UAH100 of created added value, 19 hryvnias of capital investments accrue. The volume of investment in the pharmaceutical production has not yet reached the pre-crisis level, but its intensity level is higher than the average one in sectors of the Ukrainian economy.

In the global ranking of exporters of pharmaceutical products in 2017, Ukraine was ranked 61st with the result of $0.18 billion. This indicates a significant export potential of the Ukrainian pharma, whose production is certified according to GMP.

In 2018, Ukrainian pharmaceutical products were sold to 81 countries of the world, while in 2017 only to 50. The volume of export sales in 2018 amounted to $184 million. A priori markets of the neighboring countries remain the top destinations for the export of pharmaceutical products, but market players actively develop other regions, in particular the Middle East, Asia-Pacific and EU countries. During 2016-2018, Ukrainian pharmaceutical manufacturers received nine GMP certificates from the regulatory authorities of the EU member states, which is a prerequisite for entry into European markets.

The domestic market is characterized by a high level of competition and a low level of consumption of medicines per person. Its growth is slowed down by low incomes of the population, overregulation and incompleteness of reformation of the healthcare financing system. 99% of expenses on medicines in Ukraine are funded directly by the population, while in Europe, a significant share of such expenses is covered by medical insurance and state programs. Drug consumption per capita in Ukraine is $73, which is about 10 times less than in the USA. In 2018, Ukraine has reached the pre-crisis level of this indicator of 2014. The driver of changes can be the development of medical insurance and the program “Affordable Medicines”

“Pharmaceutical markets continue to remain one of the most controlled by government agencies. The Antimonopoly Committee of Ukraine has historically paid special attention to the development of pharmaceutical markets. Among the most topical issues reviewed by the regulatory authority over the last few years is the distribution and advertising of medicinal products. As evidenced in practice, not all claims of state bodies against market players can withstand the review of judicial authorities. The existence of positive experience of market players appealing against unreasonable decisions of regulatory bodies is one of the signs of development of the rule-of-law state and the independence of the branches of government,” Serhii Denisenko, Counsel of the Law Firm “Aequo” comments.

The strengths of the Ukrainian pharmaceuticals industry are the capacity of the domestic market, considerable experience in manufacturing medicinal products, growing presence in foreign markets, as well as the availability of the entire range of basic pharmaceutical products, the necessary academic base and skilled personnel.

Retail sales make up 87% of the market. In their structure, almost one third of the market belongs to the top 10 companies, of which six are Ukrainian manufacturers. In general, in the retail sales structure, the share of domestic companies is 72% by volume and 38% by value.

Foreign companies dominate in segments where they have patent protections for products, where technological barriers exist in the manufacture of medicinal products, and in cases where there is no economic feasibility for entry into the market for domestic companies. All other segments of the market are mastered by the domestic industry with varying speed.

For the fourth year running, the growth of the pharmacy segment is observed – both by volume and by value. According to the results of 2018, pharmacy sales grew by 17.5% as compared with the pre-crisis year of 2014 and reached 1.14 billion packs.

Stanislav Shum, CEO of Top Lead: “Today everyone wonders what the Ukrainian economy should be like in order to improve the welfare of the country? Pharmaceutics is the industry that helps to achieve this goal. Its growth can be compared with the growth of the best economies of the world - 11% per year, that is, three times faster than that of the Ukrainian economy. Salaries in the pharmaceuticals industry are among the highest in the country.

So why is pharmaceuticals industry successful? Development of medicines is a high-tech industry, and the industry itself is innovative. This industry creates a product with a long value chain and high added value. In 2018, the industry created UAH 24.6 billion of GDP. In some countries (Ireland, Singapore), it is the driver of economic growth and makes up a significant share of GDP. In Ukraine, the pharmaceuticals industry could be even more prominent if the state banked on industries with high added value. At the moment, there are factors tightening the growth of the industry, in particular - high taxation. The tax burden on the industry is 5 times higher than that of the mining industry and 18 times more than that of the agriculture.

Top Lead is a content marketing agency that explains complicated things in simple language. The company helps clients to achieve their marketing goals: to show expertise, to form a loyal audience and to properly position the brand.

Top Lead specializes in data visualization: turning data that are difficult to understand into attractive and understandable infographics.

The company is ranked among the world’s top content marketing agencies and is the only one from Eastern Europe that has received the International Content Marketing Awards.

“Pharmaceutical Firm “Darnitsa” PrJSC is the largest national manufacturer of medicinal products by volume with the market share of 14.4%.

The leadership of the Pharmaceutical Firm “Darnitsa” is ensured by the use of innovative technologies and equipment from leading global manufacturers: Glatt, Fette, GEA, Marchesini, IMA, Uhlmann, Steris, Dagard. Medicinal products are manufactured under controlled conditions in accordance with GMP standards. The portfolio of the Pharmaceutical Company “Darnitsa” includes about 250 names of finished medicinal products in 15 forms.

The strategic areas of the Company’s research are cardiology, neurology and the search for solutions to overcome pain problems. “Pharmaceutical firm “Darnitsa” exports its products to 15 countries. In 2018, Darnitsa increased its net profit by 31.3% to UAH 449.134 million.

AEQUO is a forward-looking Ukrainian law firm with an industrial specialization that unites highly qualified accredited lawyers. The firm’s priority is to achieve the business goals of its clients. Significant industry experience and deep understanding of business enable the firm to develop innovative strategies and efficient solutions to the most complicated issues.