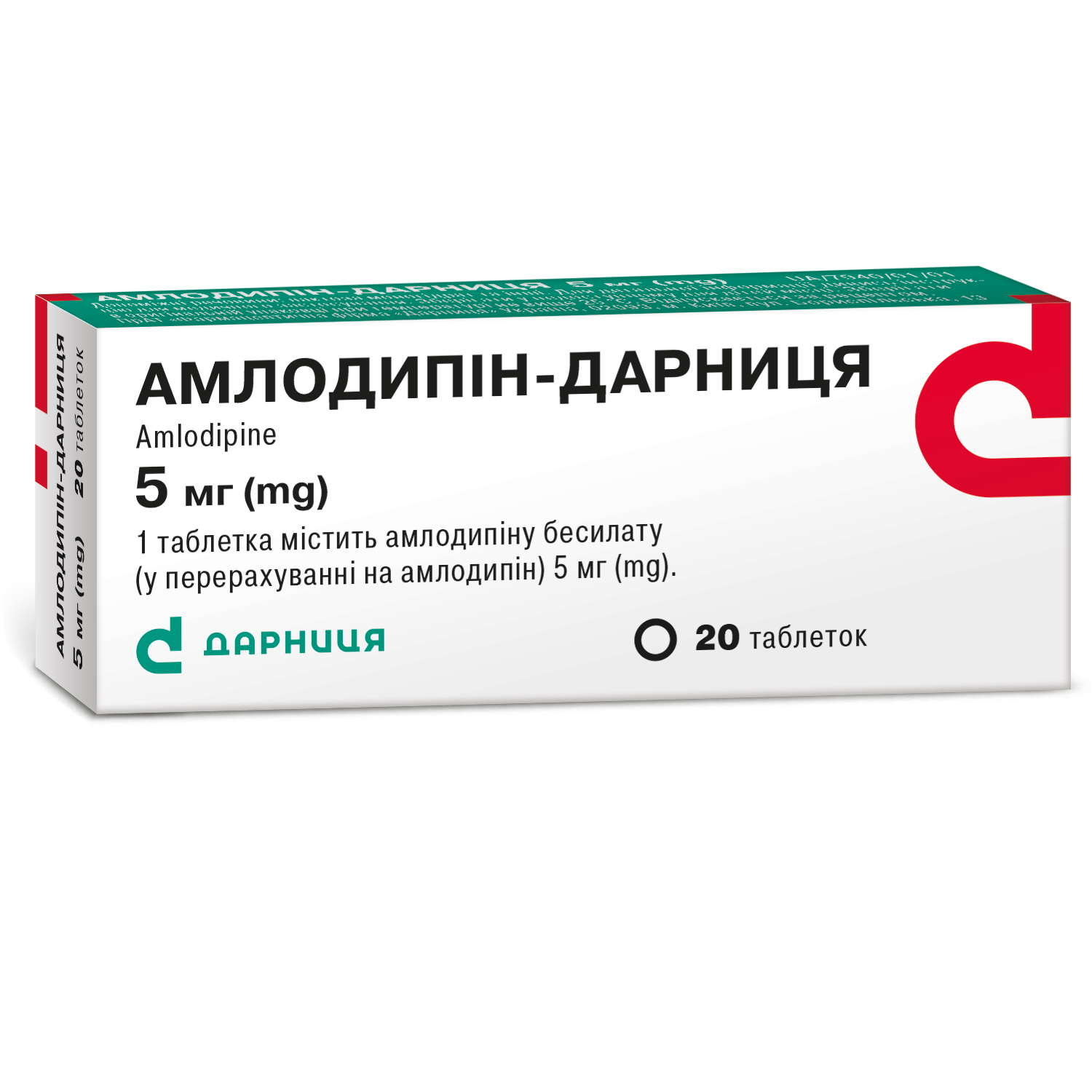 Adults. For treating arterial hypertension and angina, the recommended initial dose is usually 5 mg of amLodipine once daily. Depending on the patient's response to the treatment, the dose can be increased up to the maximum—that is, 10 mg once daily.

Children over 6 years old with arterial hypertension. The recommended initial dose in this group of patients is 2.5 mg of amLodipine once daily. AmLodipine-Darnitsa 5 mg tablets are not intended to be divided into two to obtain a 2.5 mg dose; therefore, it is necessary to use the appropriate dosage form of amLodipine.

If the required blood pressure level is not achieved over 4 weeks, the dose can be increased up to 5 mg daily. The administration of doses of over 5 mg in this group of patients has not been studied.

Order of the Ministry of Health of Ukraine

PACKAGE LEAFLET
for medical use of a medicinal product

Each tablet contains 5 mg or 10 mg of amlodipine besylate (equivalent to amlodipine) ;

Amlodipine is a calcium ion antagonist (slow calcium channel blocker) that blocks the transmembrane influx of calcium ions into cells of cardiac and vascular smooth muscles. The mechanism of the antihypertensive action of amlodipine is due to the direct relaxant effect on vascular smooth muscles. The nature of the antianginal effect of amlodipine has not yet been sufficiently studied, but it is certain that the drug reduces general ischemic disorders by the following two actions:

In patients with arterial hypertension, a single dose of amlodipine provides clinically significant reductions of blood pressure during 24 hours in both the supine and standing positions. Due to the slow onset of action, amlodipine does not cause acute hypotension.

In patients with angina pectoris, amlodipine increases physical performance (prolongs the time of physical activity, delays the development of an angina attack and the time of ST segment depression by 1 mm during physical loading), and decreases both angina attack frequency and the need for nitroglycerin tablets.

Hemodynamic studies and controlled clinical trials in patients with II-III functional class heart failure (according to the NYHA classification) have shown that amlodipine does not cause deterioration of their condition according to such criteria as exercise tolerance, left ventricular ejection fraction and clinical symptomatology.

The plasma elimination half-life is approximately 35‑50 hours, which allows administration of the drug once a day. A stable steady-state concentration of amlodipine in plasma is reached 7-8 days after regular use of the drug.

Amlodipine is extensively metabolised by the liver with the formation of inactive metabolites. It is excreted in the urine: 10% of the administered dose is unchanged, 60% – in the form of metabolites.

In elderly patients and patients with congestive heart failure, there was a tendency to decrease in the clearance of amlodipine, which led to an increase in the area under the concentration-time curve (AUC) and the half-life of the drug.

Effects of other medicinal products on amlodipine.

Data obtained during in vitro studies with human blood plasma indicate that there is no effect of amlodipine on protein binding of the studied drugs (digoxin, phenytoin, warfarin or indomethacin).

Concomitant use of amlodipine with strong or moderate CYP3A4 inhibitors (protease inhibitors, azole antifungals, macrolides such as erythromycin or clarithromycin, verapamil or diltiazem) may lead to a significant increase in amlodipine exposure, which may also lead to an increased risk of hypotension. The clinical significance of such changes may be more pronounced in elderly patients. Clinical monitoring of the patient's condition and dose selection may be necessary.

During the amlodipine use, it is not recommended to consume grapefruits or grapefruit juice at the same time, since in some patients the bioavailability of amlodipine may increase, which in turn leads to increased hypotensive effect.

In animals, fatal ventricular fibrillation and cardiovascular collapse associated with hyperkalemia were observed after intravenous administration of verapamil and dantrolene. Due to risk of hyperkalemia, it is recommended to avoid the use of calcium channel blockers, such as amlodipine, in patients susceptible to malignant hyperthermia and in the treatment of malignant hyperthermia.

Effects of amlodipine on other medicinal products.

A single dose of 100 mg of sildenafil in patients with essential hypertension did not affect the pharmacokinetics of amlodipine. When amlodipine and sildenafil were used in combination, each agent independently exerted its own blood pressure lowering effect.

Clinical studies of drug interaction have shown that amlodipine does not affect the pharmacokinetics of atorvastatin, digoxin, or warfarin.

Single and repeated administration of 10 mg of amlodipine did not significantly affect the pharmacokinetics of ethanol.

Concomitant use of aluminum/magnesium drugs (antacids) with a single dose of amlodipine did not significantly affect the pharmacokinetics of amlodipine.

The effect on laboratory test parameters is unknown.

The safety and efficacy of amlodipine in hypertensive crisis have not been evaluated.

Use in the treatment of patients with heart failure.

When using amlodipine in the treatment of patients with heart failure III-IV grade (according to the NYHA classification), an increase in the frequency of cases of pulmonary oedema was noted. In patients with congestive heart failure, calcium channel blockers, including amlodipine, should be used with caution, as they may increase the risk of future cardiovascular events and mortality.

Use in patients with impaired hepatic function.

In patients with impaired liver function, amlodipine should be started with the lowest dose. Caution should be exercised both at the beginning of the drug administration and when increasing the dose. Slow dose titration and careful monitoring may be required in patients with severe hepatic insufficiency.

Use in the treatment of patients with renal impairment.

In the treatment of such patients, amlodipine should be used at normal doses. Changes in amlodipine plasma concentrations are not correlated with the degree of renal impairment. Amlodipine is not dialyzable therefore it should be used with caution in patients undergoing hemodialysis.

Use in the treatment of elderly patients.

It is recommended to prescribe the drug in normal doses, caution should be exercised when increasing the dose.

Reversible biochemical changes in the head of spermatozoa have been reported in some patients taking calcium channel blockers. There is insufficient clinical information about the potential effect of amlodipine on fertility.

Amlodipine does not affect the results of laboratory tests.

During the amlodipine use, it is not recommended to consume grapefruits or grapefruit juice at the same time, since in some patients the bioavailability may be increased, which will lead to an increase in the hypotensive effect of the drug.

Reproductive toxicity has been observed in animal studies with high doses of amlodipine.

The safety of amlodipine use in women during pregnancy has not been established.

The use of amlodipine during pregnancy is recommended only in cases when there is no safer alternative, and the risk associated with the disease itself exceeds the possible risk from treatment to the mother/fetus.

It is not known whether amlodipine is excreted in breast milk. When deciding whether to continue breastfeeding or use amlodipine, it is necessary to evaluate the benefits/risks of breastfeeding to the child and the use of the drug for the mother.

AMLODIN-DARNITSA may have a slight or moderate effect on the ability to drive or work with other mechanisms.

The reaction may be reduced in the presence of symptoms, such as dizziness, headache, confusion, or nausea. In such cases, patient should refrain from driving vehicles or working with other mechanisms.

Adults. Usually, for the treatment of arterial hypertension and angina pectoris, the recommended initial dose is 5 mg of amlodipine once daily. Depending on the patient's response to therapy, the dose may be increased to a maximum dose of 10 mg once daily.

Children over 6 years of age with arterial hypertension. The recommended starting dose of amlodipine for this category of patients is 2.5 mg once daily. AMLODIN-DARNITSA5 mg tablets are not intended to be divided in half to obtain a dose of 2.5 mg, so it is necessary to use amlodipine tablets of the appropriate dosage.

If the required blood pressure level is not reached within 4 weeks, the dose can be increased to 5 mg per day. The use of the drug in doses exceeding 5 mg for this category of patients has not been studied.

Elderly. There is no need for dose adjustment in this category of patients. Dose increase should be carried out with caution.

Patients with impaired renal function. There is no need for dose adjustment in this category of patients.

Patients with hepatic insufficiency. Doses of the drug for use in patients of this category have not been established (see the section "Special warnings and precautions for use").

AMLODIN-DARNITSA should be used in children over 6 years of age.

The effect of amlodipine on blood pressure in patients under 6 years of age is unknown.

Symptoms. Significant overdose (>100 mg) can lead to excessive peripheral vasodilation and probable reflex tachycardia. Cases of significant and presumably prolonged systemic hypotension, including shock with fatal outcome, have been described.

Treatment. The use of activated charcoal in healthy volunteers immediately or 2 hours after taking 10 mg of amlodipine significantly reduced the absorption of the drug. Gastric lavage may be worthwhile in some cases.

Clinically significant hypotension, caused by an overdose of amlodipine requires active measures aimed at maintaining the functions of the cardiovascular system, including monitoring of cardiac and respiratory functions, elevated leg position, monitoring the volume of circulating blood, and diuresis. To restore vascular tone and blood pressure, the use of vasoconstrictor medications may be useful, if there are no contraindications to their use. In order to eliminate the effects of calcium channel blockade, intravenous administration of calcium gluconate may be useful. Since amlodipine is highly protein-bound, dialysis is not likely to be of benefit.

Hepatobiliary disorders: hepatitis, jaundice, increased levels of liver enzymes (which were most often associated with cholestasis).

After discontinuation of the drug, adverse reactions in most cases completely disappeared.

Keep in the original package at ≤25°C.

Keep away from children.

10 tablets in a blister; 3 blisters in a carton box.

Location of the manufacturer and address of manufacturing facilities.