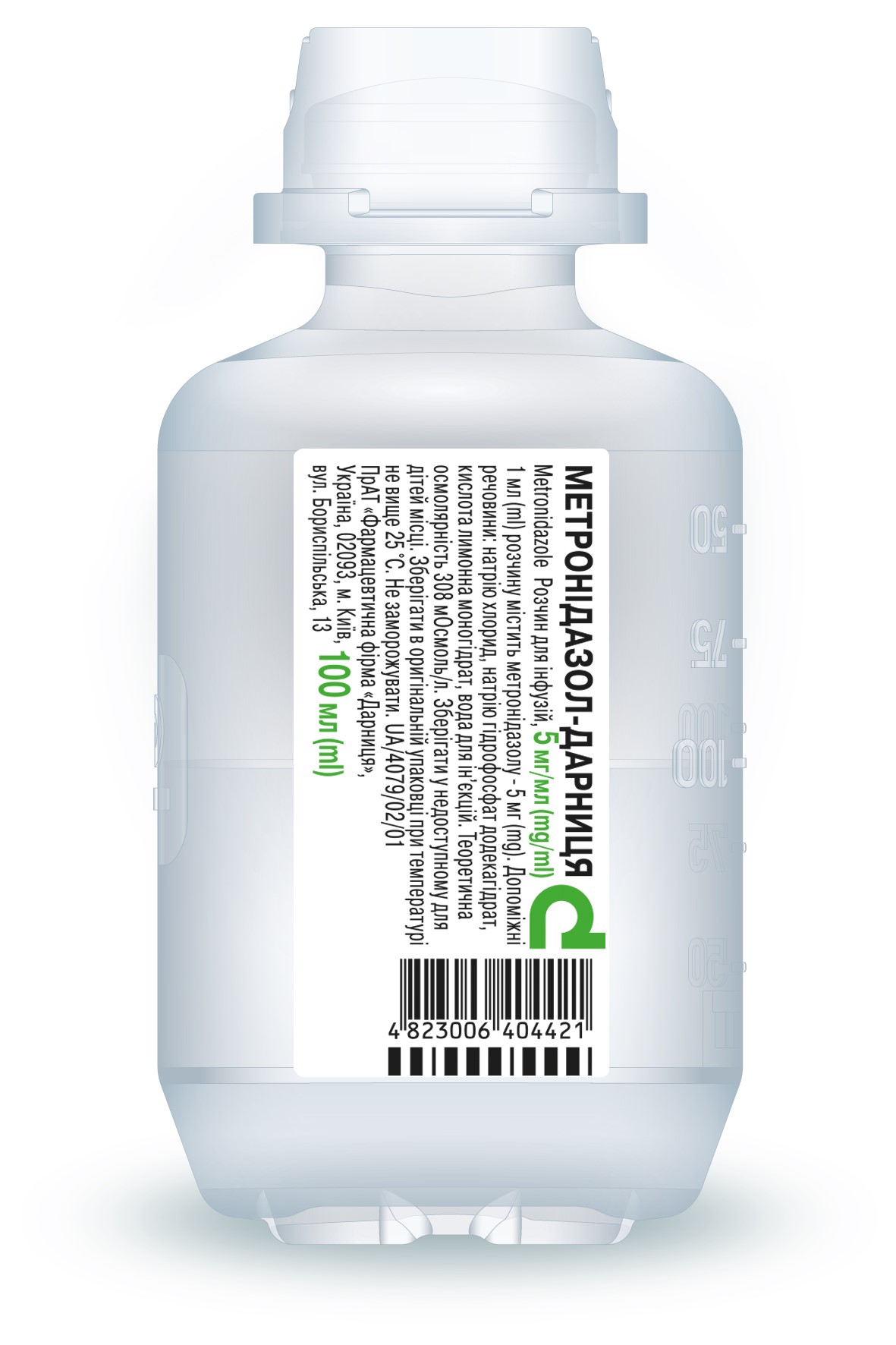 The active substance of the medicine, metronidazole, is a nitroimidazole derivative. Metronidazole is able to penetrate into microorganisms, and forms nitroso radicals with microbial pyruvate:ferredoxin oxidoreductase by oxidation of ferredoxin and flavodoxin under anaerobic conditions.

– abdominal and gastrointestinal infections (including peritonitis, liver abscess, infections after surgery on the colon or rectum, purulent lesions of the abdominal or pelvic cavity);

– bone and joint infections (including osteomyelitis);

The drug should be administered as a slow intravenous infusion (i.e. a maximum of 100 ml over at least 20 minutes, usually over 1 hour).

The dose should be adjusted according to the individual patient's response to the treatment, his/her age and body weight, and the type and severity of the disease.

The active substance of the medicinal product is metronidazole - a nitroimidazole derivative antifungal agent. Metronidazole is able to penetrate into microorganisms and under anaerobic conditions forms nitrous radicals by the microbial pyruvate-feredoxine oxidoreductase with oxidation of ferredoxin and flavodoxin. Nitroso radicals form adducts with base pairs of the DNA, thus leading to breaking of the DNA chain and consecutively to cell death.

The minimum inhibitory concentration (MIC) of metronidazole is set by the European Committee on Antimicrobial Susceptibility Testing, the breakpoints separating susceptible (S) from resistant organisms (R) are as follows:

°    In primary literature, standard reference books and therapy recommendations susceptibility of the respective strains is assumed.

Δ   Only to be used in patients with allergy to penicillin.

Metronidazole is widely distributed in body tissues after injection. Protein binding is less than 20 %, the apparent volume of distribution is 36 litres. Metronidazole appears in most body tissues and fluids including bile, bone, cerebral abscess, cerebrospinal fluid, liver, saliva, seminal fluid, and vaginal secretions, and achieves concentrations similar to those in plasma. It also diffuses across the placenta, and is found in breast milk of nursing mothers in concentrations equivalent to those in serum.

Approximately 80% of the substance is excreted in urine with less than 10% in the form of the unchanged medicinal product substance. Small quantities are excreted via the liver. Elimination half-life is 8 (6-10) hours.

Renal insufficiency delays excretion only to an unimportant degree.

Delayed plasma clearance and prolonged serum half-life (up to 30 h) is to be expected in severe liver disease.

Treatment and prevention of infections caused by microorganisms, which are sensitive to metronidazole (mainly anaerobic bacteria):

The prophylaxis of post-operative infections where anaerobic bacteria are expected to be causative pathogens (gynecologic and intra-abdominal operations).

National and international guidelines for the proper use of antimicrobials should be considered when using metronidazole.

Interaction with other medicinal products and other forms of interaction

Amiodarone - QT interval prolongation and torsade de pointes have been reported; it may be appropriate to monitor QT interval on the ECG if amiodarone is used in combination with metronidazole, if they experience symptoms that could indicate the occurrence of torsade de pointes such as dizziness, palpitations, or syncope, - should be advised to seek medical attention.

Barbiturates - may increase the hepatic metabolism of metronidazole, reducing its plasma half-life to 3 hours.

Busulfan, carbamazepine, lithium, fluorouracil - increase the plasma concentrations of the latter; caution is to be exercised when metronidazole is administered simultaneously with lithium salts, because under metronidazole therapy raised serum concentrations of lithium have been observed. Due to the potential for severe toxicity and mortality associated with elevated busulfan plasma levels, concomitant use with metronidazole should be avoided.

Disulfiram - simultaneous administration of disulfiram may cause states of confusion or even psychotic reactions, combination of both agents must be avoided; metronidazole should not be used in patients who have been taking disulfiram in the last two weeks;

Contraceptive drugs - some antibiotics can, in some exceptional cases, decrease the effect of contraceptive pills by interfering with the bacterial hydrolysis of steroid conjugates in the intestine and hereby reduce the re-absorption of unconjugated steroid, therefore the plasma levels of the active steroid decrease. This unusual interaction can occur in women with a high excretion of steroid conjugates through the bile. There are case reports of oral contraceptive failure in association with different antibiotics, e.g. Ampicillin, amoxicillin, tetracyclines and also metronidazole.

Mycophenolate mofetil - may reduce the oral bioavailability, close clinical and laboratory monitoring for evidence of diminished immunosuppressive effect of mycophenolic acid is recommended during concomitant therapy with anti-infective agents.

Coumarin derivatives - may potentiate the anticoagulant effect of these and increase the risk for bleeding as a consequence of decreased hepatic degradation. If possible, their combined use should be avoided. It is recommended that the dose of the oral anticoagulant be adjusted while taking metronidazole and for 8 days after discontinuation. No interactions with heparin-type anticoagulants have been reported. However, anticoagulant activity should be constantly monitored;

Phenytoin - inhibits the metabolism of concurrently administered phenytoin, i.e. the plasma concentration of phenytoin is increased, on the other hand, the efficacy of metronidazole is reduced.

Primidone - accelerates the metabolism of metronidazole, leads to a decrease in plasma concentrations;

Cimetidine - may reduce the elimination of metronidazole in isolated cases and subsequently lead to increased metronidazole concentrations in serum.

Metronidazole inhibits alcohol dehydrogenase and other enzymes that oxidize ethanol.

Alcohol should be avoided during metronidazole therapy for at least 48 hours after the end of treatment, due to the possibility of adverse reactions such as dizziness and nausea (disulfiram-like effect).

In patients with severe liver damage or impaired haematopoiesis (e.g. Granulocytopenia), with active or chronic severe disorders of the peripheral or central nervous system metronidazole should only be used if its expected benefits clearly outweigh potential hazards.

Convulsive seizures and peripheral neuropathy characterized by numbness or paresthesia of the extremities may occur during the use of the medicinal product.

The appearance of abnormal neurological signs demands the prompt evaluation of the benefit/risk ratio of the continuation of therapy.

Severe persistent diarrhoea occurring during treatment or during the subsequent weeks may be due to pseudomembranous colitis (in most cases caused by Clostridium difficile) (see section “Undesirable effects”). This intestinal disease, precipitated by the antibiotic treatment, may be life-threatening and requires immediate appropriate treatment. Anti-peristaltic medicinal products must not be given.

Prolonged therapy with metronidazole may be associated with bone marrow depression, leading to an impairment of haematopoiesis. Manifestations see section “Undesirable effects”. Blood cell counts should be carefully monitored during prolonged therapy.

If leukopenia develops, treatment should be continued only if the expected benefit far outweighs the potential risk.

The duration of therapy with metronidazole or medicinal products containing other nitroimidazoles should not exceed 10 days.

Only in specific elective cases and if definitely needed, the treatment period may be extended, accompanied by appropriate clinical and laboratory monitoring. Repeat therapy should be restricted as much as possible and to specific elective cases only. These restrictions must be observed strictly because the possibility of metronidazole developing mutagenic activity cannot be safely excluded and because in animal experiments an increase of the incidence of certain tumours has been noted.

Metronidazole may affect the determination of liver enzymes when measuring NADH by the constant flow method, which is based on determining the end point of reduction of reduced NADH. Unusually low liver enzyme concentrations, including zero values, have been noted.

The medicinal product is for single use only. Any unused solution should be discarded.

This medicinal product contains sodium compounds. Caution should be exercised when using in patients on a sodium-controlled diet.

The safety of the use of metronidazole during pregnancy has not sufficiently been demonstrated. In particular, reports on the use during early pregnancy are contradictory. Some studies indicated an increased rate of malformations. In animal studies with metronidazole no teratogenicity was observed.

During the first trimester, metronidazole should only be used to treat severe life-threatening infections, if there is no safer alternative.

During the second and third trimester, metronidazole may also be used to treat other infections if its expected benefits clearly outweigh any possible risk, however, short, high-dose regimens should not be used in these situations.

Patients should be warned about the potential for drowsiness, dizziness, confusion, hallucinations, convulsions or transient visual disorders, and are advised not to drive or operate machinery if these symptoms occur. This effect is mostly manifested at the beginning of treatment.

The medicinal product is administered as a slow intravenous infusion (i.e. a maximum of 100 ml for at least 20 minutes, usually for 1 hour).

Antibiotics that are prescribed at the same time should be administered separately.

The dose should be adjusted according to the individual patient's response to treatment, his age and weight, as well as the type and severity of the disease.

The following dosing instructions should be followed.

Adults and children over 12 years old.

The usual dose is 500 mg every 8 hours. In the presence of medical indications at the beginning of treatment it is possible to appoint a loading dose of 15 mg/kg of body weight.

There is no need to adjust the dose of the medicinal product (see section “Pharmacological properties”).

Patients with severe hepatic impairment may require dose adjustment due to a prolongation of its half-life and a decrease in plasma clearance (see section "Pharmacological properties").

The duration of treatment depends on its effectiveness. In most cases, a 7-day course will suffice. If clinically indicated, treatment may be continued (see section “Special warnings and precautions for use”).

Adults and children over 11 years old.

The usual dose is 500 mg. Metronidazole should be completed approximately 1 hour before surgery. The medicinal product is re-administered in the same dose after 8 and 16 hours.

Medicinal product is used for children starting from 2 years.

Treatment: If required, metronidazole can be effectively eliminated by haemodialysis. There is no specific treatment or antidote. If an overdose is suspected, symptomatic and supportive treatment should be prescribed.

Undesirable effects are mainly associated with prolonged use or high doses. The most commonly observed effects include nausea, abnormal taste sensations and the risk of neuropathy in case of long term treatment.

Renal and urinary disorders: dark urine (due to the release of the metabolite metronidazole), dysuria, cystitis and urinary incontinence.

If seizures or signs of peripheral neuropathy or encephalopathy appear, the attending doctor should be informed immediately.

Cardiac disorders: changes in the electrocardiogram, similar to the alignment of the T wave, hypotension.

Be sure to have regular blood counts during long-term use of the medicinal product.

Infections and invasion: genital superinfections (caused by Candida), pseudomembranous colitis, which may occur during or after therapy and manifests itself in the form of severe persistent diarrhea.

The description of urgent treatment is given in the section "Special warnings and precautions for use".

Store in the original package at a temperature not exceeding 25 °C. Do not freeze.