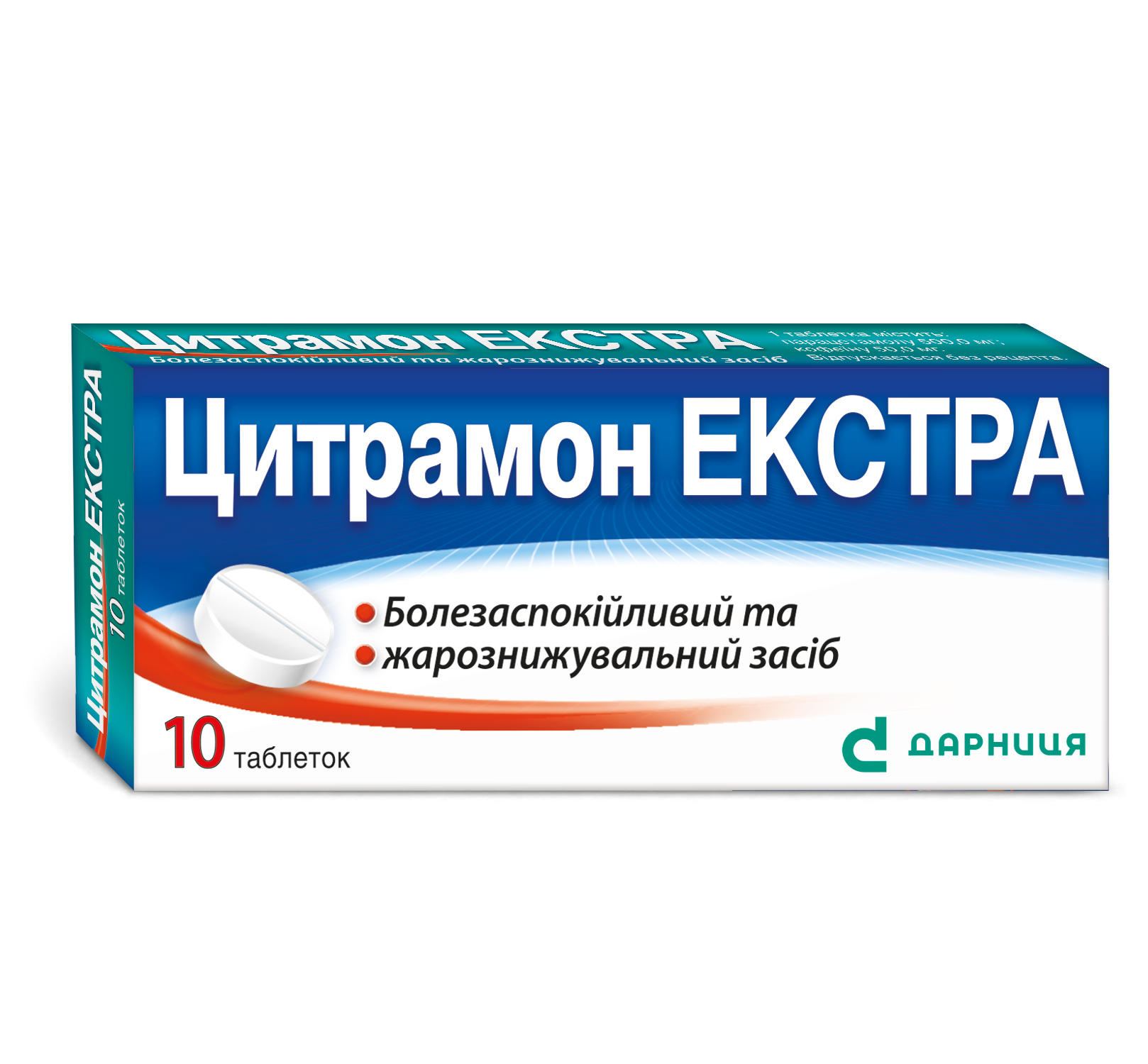 The drug has a moderate analgesic and antipyretic action. The indications for use are headache, including migraine, toothache, neuralgias, rheumatic pain, menstrual pain in women; to relieve cold and flu symptoms, throat pain.

Paracetamol has analgesic, antipyretic and mild anti-inflammatory effects, which are associated with its impact on the thermoregulatory center in the hypothalamus, and a less pronounced ability to inhibit production of prostaglandins in tissues.

Caffeine increases the spinal reflex excitability, stimulates the respiratory and hemodynamic centers, dilates blood vessels of the skeletal muscles, brain, heart, kidneys, reduces platelet aggregation; reduces somnolence, fatigue, increases mental and physical performance. In this combination, low-dose caffeine has virtually no stimulating effect on the central nervous system, however helps to improve the tone of blood vessels in the brain and speed up the blood flow.

Paracetamol and caffeine are rapidly absorbed from the gastrointestinal tract and distributed throughout most body tissues. Plasma protein binding of paracetamol is minor at usual therapeutic concentrations.

Paracetamol and caffeine are metabolized mainly in the liver and excreted via urine as by-products. The mean plasma half-life after oral administration is about 2.3 hours for paracetamol and about 4.9 hours for caffeine.

The drug has moderate analgesic and antipyretic effects. Therapeutic indications are headache, including migraine, toothache, neuralgia, rheumatic pain, period pain in women; to relieve symptoms of cold and flu, and sore throat.

Do not combine with monoamine oxidase (MAO) inhibitors and during 2 weeks after discontinuation of MAO inhibitors.

The drug is contraindicated in patients on tricyclic antidepressants or β-blockers.

Concomitant use of paracetamol with hepatotoxic drugs inhances the liver toxicity.

Paracetamol may reduce the bioavailability of lamotrigine by reducing its effect due to possible induction of its liver metabolism.

Co-administration of paracetamol and zidovudine increases the risk of neutropenia.

Concomitant use of high-dose paracetamol with isoniazid increases the risk of hepatotoxic syndrome.

Metoclopramide and domperidone increase the absorption of paracetamol.

Ethanol: concomitant use of paracetamol and ethanol increases the risk of hepatotoxic effects and acute pancreatitis.

Do not use simultaneously with alcohol.

Prolonged co-administration with acetylsalicylic acid or other nonsteroidal anti-inflammatory drugs may lead to kidney damage.

Coumarin derivatives (warfarin): prolonged use of paracetamol increases the risk of bleeding. Single dose administration has no major effects.

Cholestyramine reduces the absorption of paracetamol.

There is 5-fold increase of excretion time of chloramphenicol due to paracetamol.

Probenecid affects the plasma concentration of paracetamol and its excretion.

Paracetamol reduces the efficacy of diuretics.

Concomitant use of caffeine with MAO inhibitors can cause a dangerous increasing of blood pressure.

Cimetidine, hormonal contraceptives, and isoniazid increase the effects of caffeine.

Caffeine reduces the effect of opioid analgesics, anxiolytics, hypnotics and sedatives, is an antagonist of anesthetics and other drugs that depress the central nervous system, and is a competitive antagonist of adenosine and adenosine triphosphate (ATP).

Co-administration of caffeine with thyrotropic agents increases the thyroid effect.

Caffeine decreases the concentration of lithium in the blood.

Caffeine accelerates the absorption of ergotamine.

The doctor should be consulted regarding the possibility of treatment in patients with renal and hepatic impairment.

It should be noted that patients with liver disease are at increased risk of hepatotoxic effects of paracetamol.

Alcohol should not be consumed during therapy. At doses higher than 6–8 g per day, paracetamol may be toxic to the liver, although adverse hepatic effects may occur at much lower doses in the case of alcohol use, administration of inducers of liver enzymes or other substances that have hepatotoxic effects; and these effects are greater in patients with non-cirrhotic alcoholic liver disease. Prolonged alcohol consumption significantly increases the risk of hepatotoxic effects of paracetamol. In patients with hepatic impairment and patients taking high-dose paracetamol for a long time, it is recommended to perform liver function tests regularly.

If the patient is taking warfarin or similar drugs that have an anticoagulant effect, the doctor should be consulted prior to treatment. Restrictions on the drug use in such patients are primarily defined by the content of paracetamol.

When co-treated with oral anticoagulants and high-dose paracetamol, prothrombin time should be monitored.

The medicinal product may affect the results of laboratory tests for blood glucose and uric acid.

Cases of hepatic impairment/liver failure have been reported in patients with low glutathione levels, such as severe exhaustion, anorexia, low body mass index, chronic alcoholism or sepsis. Patients with low glutathione levels, who receive paracetamol, are at increased risk of metabolic acidosis. Symptoms of metabolic acidosis are deep, rapid or difficult breathing, nausea, vomiting, loss of appetite. If such symptoms occur, medical advice should be sought.

Consumption of excessive amounts of caffeinated beverages (e.g., coffee, tea, and some other beverages) is not recommended during treatment with the medicinal product. This can result in sleep disturbances, tremor, chest discomfort due to palpitations, feeling of tension and irritability.

The indicated doses of the drug should not be exceeded.

This medicinal product should not be combined with other agents containing paracetamol.

If symptoms persist, medical advice should be sought.

If headache persists, medical advice should be sought.

Keep the medicine out of sight and reach of children.

The drug is not recommended during pregnancy, since it increases the risk of caffeine-induced miscarriage.

The drug has no significant effect.

The drug is intended for oral use.

Adults and children older 12 years: 1–2 tablets 4 times daily. The dosing interval is at least 4 hours. Do not take more than 8 tablets (4,000 mg paracetamol/400 mg caffeine) within 24 hours. The recommended dose should not be exceeded.

Do not take with other paracetamol-containing medicines.

The duration of treatment is determined by the doctor.

The drug is not recommended for use in children under 12 years of age.

Overdose with paracetamol can cause liver failure, which may require a liver transplantation or be fatal.

Symptoms of overdose within the first 24 hours: pallor, nausea, vomiting, anorexia and abdominal pain. Liver damage may become apparent within 12 to 48 hours after the overdose and reach maximum in 4 to 6 days. Glucose metabolism impairment and metabolic acidosis may occur. In severe poisoning, liver failure can progress to encephalopathy, hemorrhages, hypoglycemia, coma, and lead to fatal outcome. Acute renal failure with acute tubular necrosis can manifest as severe low back pain, hematuria, proteinuria and may develop even in the absence of severe liver damage. Cardiac arrhythmias and pancreatitis have been reported.

With the long-term use of the medicinal product in high doses, hematopoietic disorders such as aplastic anemia, pancytopenia, agranulocytosis, neutropenia, leukopenia, and thrombocytopenia may develop. High-dose therapy is associated with CNS disorders such as dizziness, psychomotor agitation and disorientation as well as with urinary tract disorders such as nephrotoxicity (renal colic, interstitial nephritis, capillary necrosis).

The use of activated charcoal should be considered if an excessive dose of paracetamol has been taken within the last 1 hour. Plasma paracetamol concentration should be measured in 4 hours or later after dosing (earlier concentrations are unreliable). Treatment with N-acetylcysteine may be initiated within the first 24 hours after paracetamol intake; however, the maximum protective effect is achieved within 8 hours after the intake. The efficacy of the antidote declines drastically after this time passes. If required, the patient should be given intravenous N-acetylcysteine in line with the recommended dosage. If there is no vomiting, oral methionine may be a suitable option for remote areas, outside the hospital.

Caffeine overdose may cause epigastric pain, vomiting, diuresis, tachypnea, extrasystoles, tachycardia or cardiac arrhythmia, effects on central nervous system (dizziness, insomnia, nervous excitement, irritability, affective state, anxiety, tremor, convulsions). Clinically significant symptoms of caffeine overdose are also associated with paracetamol-induced liver damage that which may occur with the intake of such amount of drug that causes an overdose with caffeine. There is no specific antidote, however, supportive measures such as the use of β-adrenoceptor antagonists may alleviate cardiotoxic effect. Recommended management includes gastric lavage, oxygen therapy, and diazepam in case of convulsions. Symptomatic therapy.

The listed side effects have been obtained during post-marketing reports. Since these reactions have been reported voluntarily from a population of uncertain size, it is not possible to estimate their frequency but they are likely to be very rare (< 1/10,000).

Respiratory, thoracic and mediastinal disorders: rhinitis, nasal congestion, bronchospasm in patients who are sensitive to acetylsalicylic acid and other nonsteroidal anti-inflammatory drugs.

Concomitant use of the drug in the recommended doses with caffeine-containing products may enhance the side effects caused by caffeine such as dizziness, nervousness, insomnia, restlessness, anxiety, irritability, headache, gastrointestinal disorders, and palpitations.

Reporting of suspected side effects.

Store in the original package at temperature not above 25 °C.

Keep out of reach of children.

10 tablets in a blister; 1 blister in a carton box. 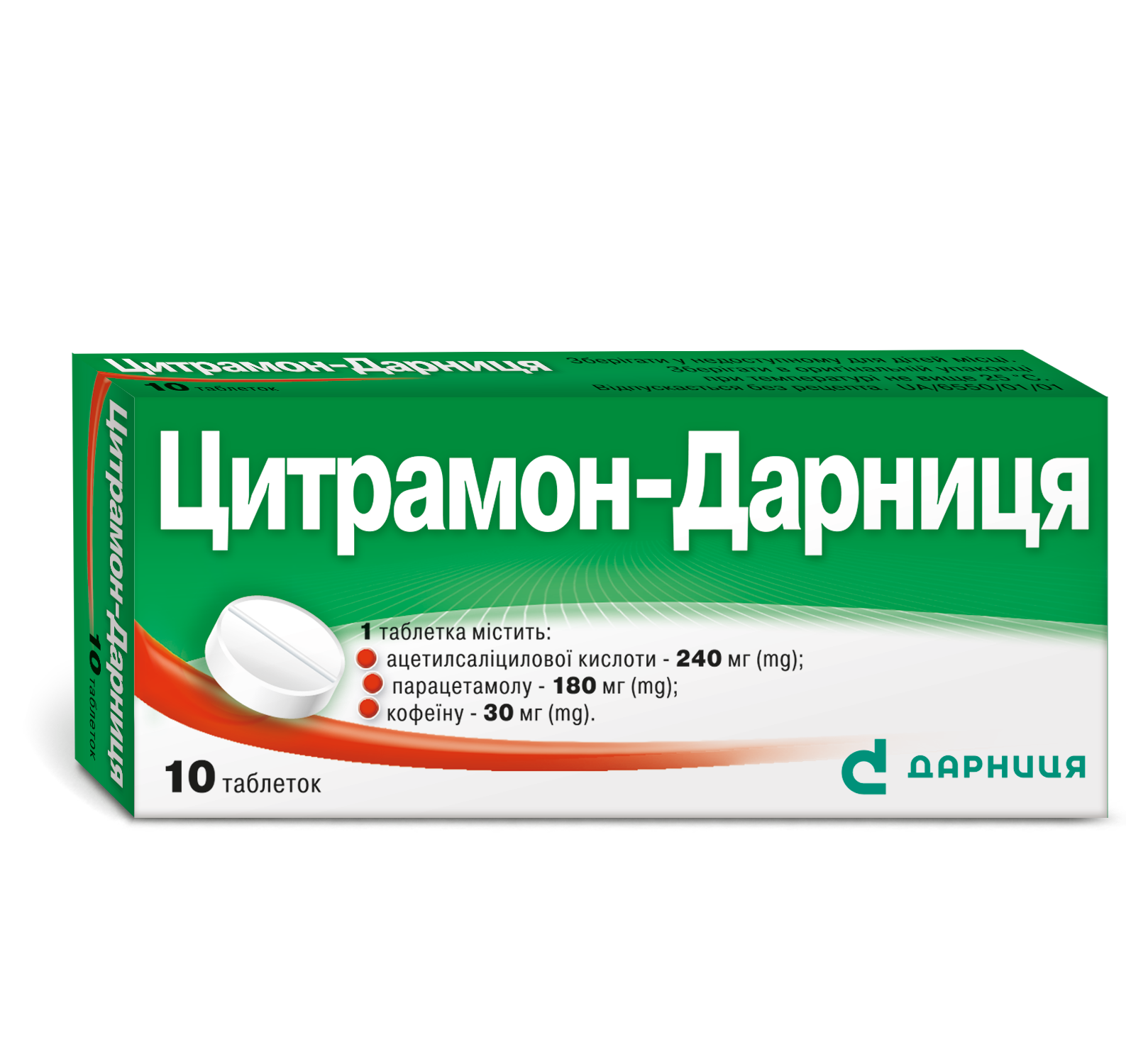 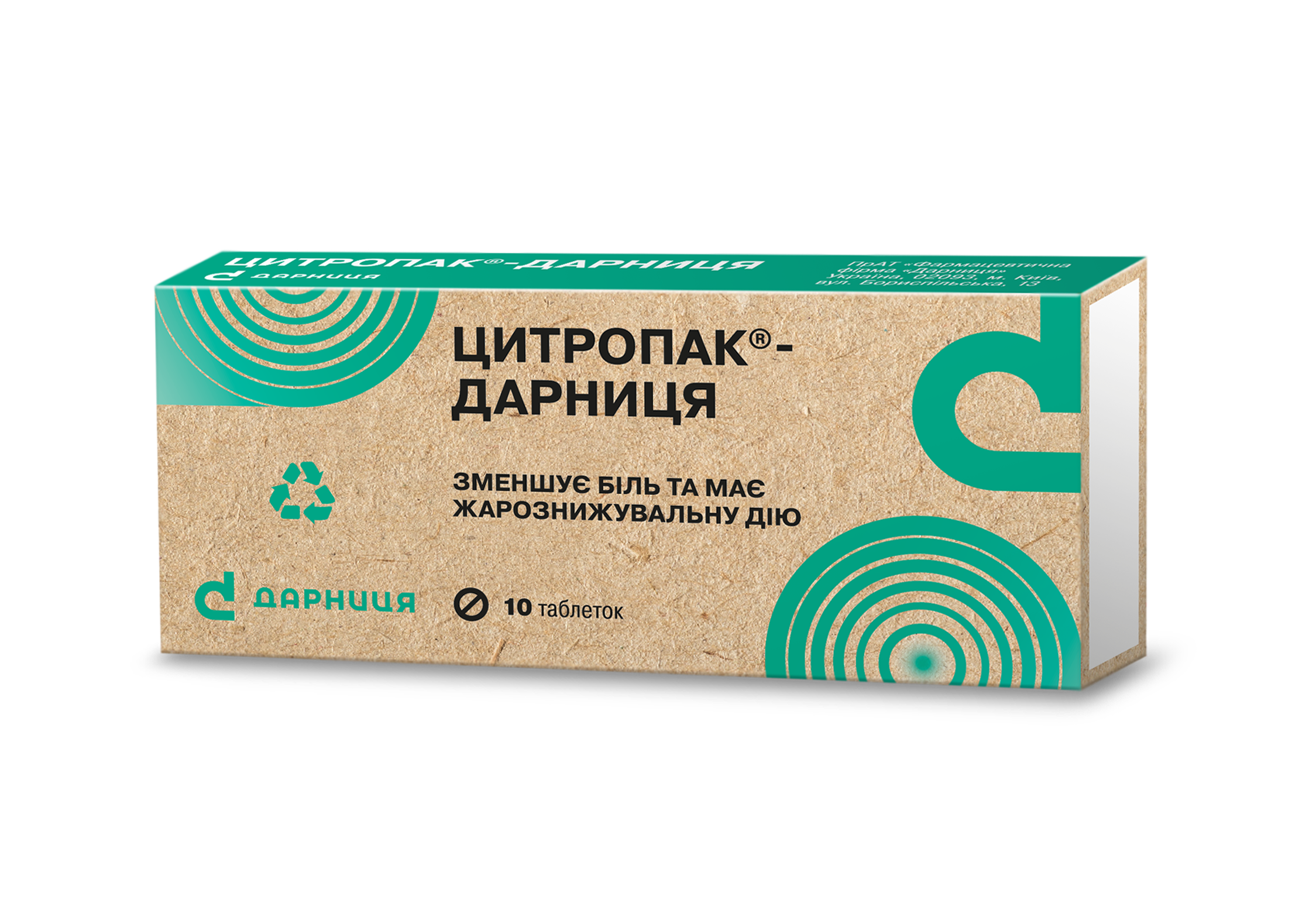 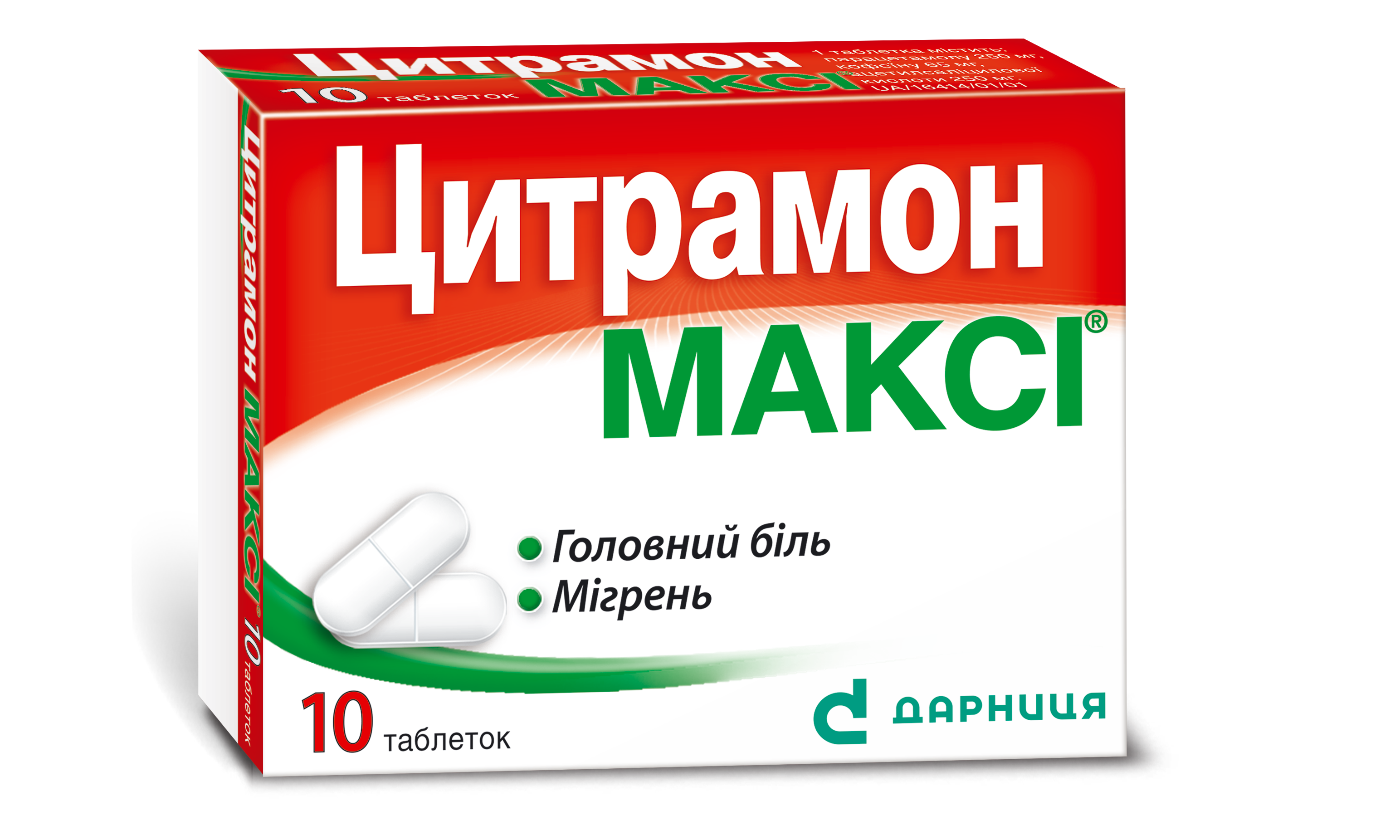 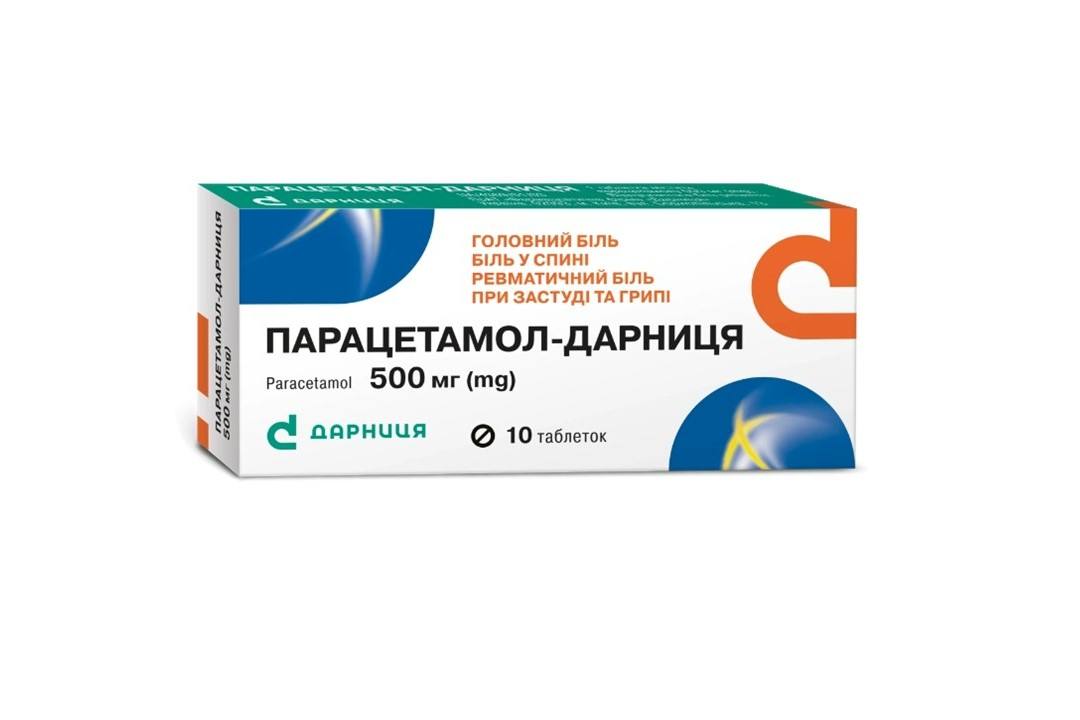