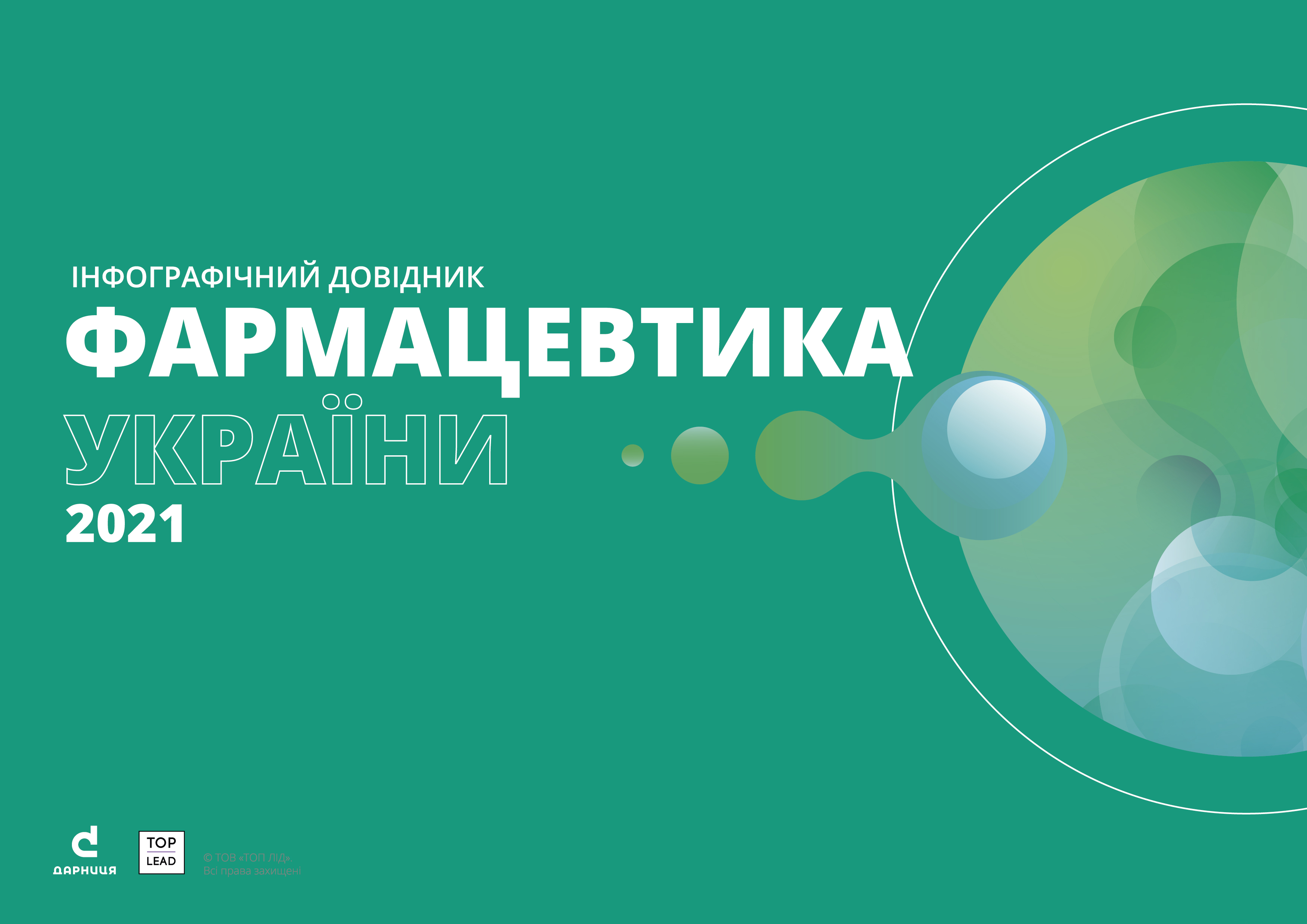 The pharmaceutical industry is effectively overcoming the ramifications of the COVID-19 pandemic and, considering the pace of changes, it has become a leader among Ukraine's economy sectors. This is stated in the infographic guide "Pharmaceutics of Ukraine 2021", prepared by Top Lead with the support of the pharmaceutical company "Darnitsa" and analytical partner Business Views. The study shows the main changes in the market, the position of domestic and foreign players, trends, opportunities, problems and achievements of the Ukrainian pharmaceutical industry.

The pharmaceutical industry of Ukraine has more than a century-long history. At every stage of the development it has been and still is a center of innovation, where the scientific and technological potential of the country is concentrated. The modern pharmaceutical industry is among the leaders in terms of work productivity and innovation costs, although it is not the largest sector of the economy. The Covid-19 pandemic has clearly demonstrated the importance of a strong pharma as a component of the healthcare system and a factor in strengthening national security: in addition to economic impact, the growing pharmaceutical production has a positive effect on living standards.

Pharmaceutics was one of the first to weather the negative effects of the pandemic and lockdowns that came along. According to the Chairman of the Darnitsa Group Board of Directors Dmytro Shymkiv, pharma is so stress-resistant due to innovations penetrating heavily all processes. “The highest share of innovatively active manufacturing units is present in the pharmaceutical sector, among all branches of the processing industry. 48% of pharmaceutical manufacturers are focused on innovations in the field of R&D, technology and equipment, acquisition and application of new knowledge. Pharmaceutical companies have allocated 1.5 billion hryvnias for this. ”

Strong local pharma prevented shortage of drugs in 2020. The high level of automation and digitalization of processes has enabled Ukrainian pharmaceutical manufacturers to quickly adapt to market needs and ensure the production of the necessary drugs.

Pharmaceutical production, according to Stanislav Shum, the CEO of Top Lead, is one of the leaders in terms of productivity. “In respect of GDP per employee - 1 million 356 thousand hryvnias, pharmaceutics is ahead of all branches of the processing industry. The high level of productivity in pharmaceutics creates resources for investing into development and attracting the best highly paid specialists. According to the State Statistics Service, wages in this area are twice the level of wages in the processing industry."

At the beginning of 2021, the market volume for medicines amounted to 4 billion US dollars, and drug consumption increased to 96 US dollars per person per year. This is less than in European countries, but the growth rate is significant against the background of the positive dynamics of the last 5 years.

The dominant role still belongs to the pharmacy segment - 85% of the market is financed directly by consumers and only 15% - by the state. The authors of the study highlight the positive trend: every year the pharmacy market grows by 12.6% on average. Under the influence of the Covid-19 pandemic in 2020, this rate has slowed a bit - to 7.9%, nevertheless, pharmaceutics feels more confident against other sectors of the economy.

Analysts note that the hospital market shows improving dynamics: over the past 5 years it has grown by 10.9% on average annually and last year it reached $ 0.6 billion. The increase in sales is due to the growth of public procurement of drugs to combat COVID-19 and the concentration of these purchases in the hands of a new player - SE "Medical Procurement of Ukraine", which acts in the interests of the Ministry of Health of Ukraine.

Despite the challenges, in 2020 all companies in the TOP-20 (they are controlling 50% of the market) showed an increase in sales, and 13 of them were able to increase their market share, according to the Evolution Index.

Ukrainian manufacturers are gradually increasing their presence in the retail segment. The share of Ukraine-produced medicines in monetary terms increased from 28% in 2010 to 37% in 2020. At the same time, the share of sales of medicines in physical terms decreased insignificantly - up to 69%, which indicates a higher growth rate of prices for foreign drugs.

Import dominates in the structure of medicines foreign trade, which reflects the general situation in the economy. Since 2015, it has grown by 79% to almost $ 2 billion, with Ukraine importing drugs mainly from European countries and India. Exports are growing at a similar pace: over the past 6 years, they have increased by 68% to 235 million US dollars. The CIS countries remain the key regions of presence, though supplies to the markets of the Middle East, North Africa and the EU are growing. Analysts assess further expansion of the geography for Ukrainian pharmaceutical manufacturers providing their products as promising if the integration of Ukrainian and EU legislation continues, as well as the removal of regulatory barriers that significantly slow down companies and the release of new products.

The guide authors emphasize that in spite of the difficult year, there have been positive changes enabling harmonization of medicines production and circulation norms of Ukraine and the EU. The work is done in the following directions:

The study outlines the positive transformations in the field of digitalization of the healthcare system, medicines manufacturing, and developments of the market regulation system, which stimulate its development. In particular, analysts note the importance of the transition to e-prescription, the development of online trade in medicines, digitalization of drug production and the introduction of electronic document management by market participants. According to forecasts, the share of e-commerce in the Ukrainian pharmaceutical market will grow faster than in the world and will reach 15% in 2026.

When it comes to promoting pharmaceutical products, the main task for market participants will be to find an effective balance between offline and online communication. In the meantime, according to the guide, every year pharmaceutical companies are investing more in advertising their brands on TV. However, in 2020, the volume of this segment of advertising increased by less than 1% and amounted to 130 million US dollars. Digital channels are increasingly competing with TV commercials. The activity of pharmaceutical brands in Internet promotion is actively growing from year to year, this is especially noticeable in the last two years. Under the influence of the lockdown, the digital segment in the medicines promotion has also increased.

According to the authors of the study, the Ukrainian pharmaceutical market has positive prospects for further development. The key factors in accelerating its growth are the continued reform of Ukraine’s healthcare system, the promotion of voluntary health insurance, the development of contract manufacturing, the expansion of the reimbursement program, and the creation of an effective public-private partnership system.

Infographic guide "Pharmaceutics of Ukraine-2021" - the fourth edition, prepared by Top Lead together with the pharmaceutical company "Darnitsa". Download the directory.